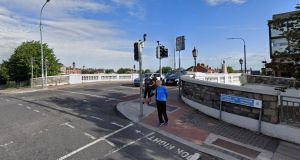 Harold’s Cross bridge in south Dublin city was closed off on Wednesday evening while gardaí and members of the Defence Forces dealt with a grenade dating from the War of Independence.

The grenade was found in the Grand Canal close to the bridge and was taken from the water.Gardaí closed the bridge to road and pedestrian traffic. The army bomb disposal team arrived at the scene around 8.30pm and assessed the device.

Dublin Traffic: Harold’s Cross Bridge is currently closed in both directions to road and pedestrian traffic. Updates to follow.

It was found to be a mills type grenade used during the War of Independence which took place between 1919 and 1921. It was made safe at the scene and the road has since reopened. The bomb disposal unit left the area at about 10.30pm.