Implants are considered to have more potential long-term problems 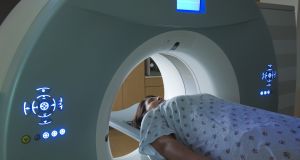 A woman receiving a scan for breast cancer diagnosis

They can have the Diep- flap procedure, implants or a combination of both. Plastic surgeons tend to prefer implants on their own.

The Diep flap (deep inferior epigastric perforator) involves taking a portion of tissue, usually from the abdominal area, and transplanting it onto the chest.

Surgeons then shape this into a “mound reconstruction”.

This procedure, which can take six to eight hours under general anaesthetic and is deemed the Rolls Royce of breast reconstruction, is dependent on the individual case and patient’s medical history.

This highly technical microsurgery is considered to offer the best long-term prognosis, when compared with implants.

However, it can have “catastrophic” effects in the short term if it goes wrong, culminating in the need for a completely different approach.

This occurs in about 5 per cent of patients.

The Diep flap is free to public patients but is not covered by private insurance companies.

Nor are follow-up operations carried out with the €40,000 “body jet”, a state- of-the-art machine recently bought by the Mater hospital following fundraising through the Mater Foundation.

The machine extracts comparatively high volumes of high-grade fat, or “liquid gold”, which is used in follow-on procedures such as uplifts.

Post-reconstructive procedures also include breast reductions and nipple restructuring (which can mean the tattooing of the areola area).

Mastectomies require reconstruction but lumpectomies do not, as just the lump is removed.

In the Mater hospital, a total of 60 such reconstructions were carried out last year and 70 so far this year. Hundreds are completed in other Irish hospitals annually.

Implants are considered to have more potential long-term problems, particularly “capsular contracture”. (This is when a firm capsule forms around the implant which can cause pain and deformity of the breast).

However, Richard Hanson, consultant plastic surgeon at the Mater hospital, said the first person who got them in the United States has had them in place since the 1970s.

1 Gardaí found naked man on a cross being whipped in Dublin club, court told
2 Two in custody after Ryanair flight to Dublin forced to divert
3 Taoiseach says Garda document on Cowen case ‘not quite as portrayed’
4 Many people identified as close contacts refusing to come forward for Covid-19 testing
5 Man (47) charged over damage to Luke Kelly statue in Dublin
Real news has value SUBSCRIBE