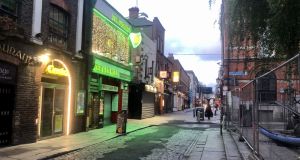 Pubs in Dublin’s Temple Bar may not open as planned on July 20th because of fears of a repeat of the scenes at nearby Dame Lane last Saturday.

Very few pubs in Temple Bar have opened since all licenced premises shut on March 15th.

Temple Bar company chief executive Martin Harte said the area’s publicans were “appalled” by the scenes of hundreds of people drinking in public in a narrow allyway in Dame Lane which is close to, but not a part of Temple Bar.

The short clip, which was uploaded to Twitter, showed people crowded together without observing social distancing on Saturday night.

It prompted Taoiseach Micheál Martin to state that plans to allow all pubs to open from July 20th may have to be reviewed.

Mr Harte estimated that only one and possibly two of Temple Bar’s 30 pubs have reopened, yet he maintained some people had sought to link the scenes in Dame Lane with Temple Bar.

“To have a stupid scene like that from the first weekend is appalling. I haven’t heard from any Temple Bar publican who wasn’t appalled. They were annoyed about what happened. Dublin city does not need this,” he said.

He said it may be “at least the end of July and it could take longer” before Temple Bar pubs open. Publicans had sought international advice from China which suggested that they should not reopen until they felt it was safe to do so.

“People are very concerned over the changing nature of guidelines,” he said.

“Six weeks ago there was a lot more consistency about the messages that were coming out from Government in terms of when you could open.

“And then it got a little bit confused. I think that people are genuinely concerned that if they do open, a story is going to run like the one with Dame Lane.

“Most of the publicans in Temple Bar think it has to open safely because of its brand and they don’t want what happened in Dame Lane to reverberate across social media for them.

“It has happened in the past, but they don’t want it to happen in the future. They don’t want to open quickly to be closed down again. It could damage the city economy which could have serious repercussions for the future.”

Mr Harte said they have studied the example of Hong Kong and how it was able to reopen following the pandemic.

He said the city, which is going through tumultuous political unrest at the moment, was chosen because its dense city streets are similar to Temple Bar. 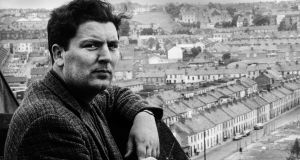