Stockholm Syndrome kicks in for the Chuckle Sisters

What is behind rapprochement between Arlene Foster and Michelle O’Neill? 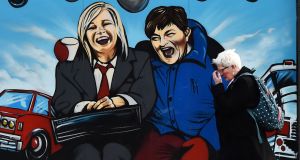 How is it that Arlene Foster and Michelle O’Neill seem to be getting on so well? In the past couple of weeks the DUP First Minister and Sinn Féin Deputy First Minister appear to be pulling much better together.

But is it real or are they faking it? It is an interesting question, especially since in early April, as the coronavirus crisis was escalating, the Northern Executive was in turmoil with Sinn Féin being seen “as against the rest”.

Then Sinn Féin had excoriated ministers from the other four parties – the DUP, SDLP, Ulster Unionist Party and Alliance – with most of its ire directed at UUP health minister Robin Swann.

The toxic brew had been bubbling from March but erupted publicly on April 2nd when O’Neill declined to express confidence in Swann when quizzed on the BBC’s The View current affairs programme.

There were rows, too, over slow coronavirus testing, the closing of schools and the lack of personal protective equipment (PPE) in healthcare settings. In particular, they clashed over Stormont “slavishly” following Boris Johnson’s Covid-19 strategy.

There was a real sense that collegial responsibility – the glue needed to keep administrations together – was being jettisoned in Stormont, just three months after the Northern Executive’s restoration.

There were fears that it could collapse again. Facing into Covid-19, the public wanted comfort that politicians could work together. In March and early April that appeared impossible.

But fast forward to 10 days ago and Foster and O’Neill are presenting a united front in an interview on Sky TV.

It’s an old story in politics: put people together long enough and Stockholm Syndrome kicks in, creating amity where there was hostility

“We have shown that we can work together in difficult times,” said Foster.

“I believe that the past number of months, because of Covid-19, has probably brought us closer together,” agreed O’Neill.

It was remarkable in its own way. Foster and O’Neill have stood together before for sure. Too often, however, their body language when they were together told more about how far they were apart.

Now, the relationship has relaxed, partly caused by a bond created, as O’Neill revealed, both of their mothers ended up in hospital during the lockdown.

Besides joking together about a desire for hairdressers, Foster said she and O’Neill were seeing so much of each other that they now qualify for being practically the “same household”.

It’s an old story in politics: put people together long enough and Stockholm Syndrome kicks in, creating amity where there was hostility. And no harm either: The Chuckle Brothers camaraderie during the days of Ian Paisley and Martin McGuinness – though often parodied – was contagious and encouraging for Northern Ireland society.

But is it real or an illusion, or just pragmatic politics to get the DUP and Sinn Féin over a hump when for the sake of appearances they need to be seen to be working together?

In time, will everything revert to antagonistic Green-Orange politics? Privately, senior observers say the Foster/O’Neill collaboration is genuine, and one that has withstood some strong buffeting.

For instance last month, the DUP had to swallow hard when at an Assembly committee, Sinn Féin MLA Martina Anderson nicely teed up colleague and junior minister Declan Kearney to prematurely disclose that due to Brexit, new physical border posts would be created at Northern Ireland ports.

What was unsaid but poisonously implicit was that the DUP’s propping up of the previous Conservative government in London hadn’t prevented what unionists abhor – a border on the Irish Sea.

Still, the DUP didn’t become too exercised over the issue, mostly taking on the chin the anger of the Ulster Unionists and the Traditional Unionist Voice’s Jim Allister, and the “we told you so” jibes of the SDLP.

Last month, Sinn Féin leader Mary Lou McDonald said in a newspaper interview that the IRA’s campaign of violence was “justified” and that had she been the right age, there was “every chance” she would have joined up.

The DUP dealt with that with the expected condemnatory responses from Gregory Campbell and Jeffrey Donaldson, but their reaction was not amplified to a point where it could damage the Foster-O’Neill partnership.

Explaining the relatively composed reaction, one DUP source argued that McDonald’s remarks to the Sunday Independent would do her and Sinn Féin more harm than good.

From now on, he argued, she will be faced with regular questions on which particular IRA killings she felt were justified – Bloody Friday, Enniskillen, Mullaghmore, Warrington, Shankill Road?

Furthermore, it would remind unionists – some who switched to Alliance and who could be enticed back by the DUP – of Gerry Adams’s old line about the IRA, that “they haven’t gone away, you know”. In all, the DUP could live with the aggravation.

Previously, there were serious tensions over claims – and they are more than claims – that the DUP was looking to London and Sinn Féin to Dublin on how to tackle coronavirus. But Foster and O’Neill cracked that conundrum as well by agreeing a route out of lockdown that was custom-made for Northern Ireland, a move that was generally welcomed.

But why did their rapprochement happen in the first place? Regular personal contact played its part, but pragmatism and Stormont’s survival drove matters, too. If they didn’t swim together, they would sink together.

It took three years to resurrect Stormont after the collapse of January 2017. How would the Northern Ireland public feel if the DUP and Sinn Féin wrecked it in three months, particularly during the Covid-19 crisis?

Moreover, what would be the view in the Republic about Sinn Féin’s ability to be part of a Dáil administration, or act as a credible main opposition, had Stormont collapsed again?

Very shortly after, O’Neill cut loose with her criticisms on The View that there was a gut realisation that public squabbling was not serving the interests of either Sinn Féin or the DUP.

Indeed, the day after the interview, Sinn Féin finance minister Conor Murphy was embroiled in a controversy over whether a joint order for PPE from China had been made with the Irish Government. No such order had been placed.

Foster’s party had a golden opportunity to make mischief for Sinn Féin, but it appears it consciously decided not to press home its advantage, though DUP MLA Paul Frew did raise the issue again this week.

Perhaps it was mere coincidence, but there was an example of possible Sinn Féin reciprocation when, again the day after The View interview, Murphy almost casually told the BBC that if there were a request for the British army to assist in tackling Covid-19 in the North, Sinn Féin would be open to such a proposal. “All rules are out the window,” he said.

While Sinn Fine had previously said it would do whatever was right to combat the virus, hearing a willingness from the mouth of a former IRA member to see the British army back on the streets was rather startling.

Of course it all could turn for the worse on a sixpence. For instance, when the pandemic eases, the constitutional question will be thrust back high up the agenda.

But if the DUP and Sinn Féin could permit that debate to continue in a way that was somehow decoupled from the normal politics of running Northern Ireland, then perhaps the Foster-O’Neill accord could be maintained.

In the Sky News interview, O’Neill said neither she nor Foster were going to change their republican and unionist allegiances. “That’s just politics,” she acknowledged. So, maybe a sensible accommodation can be reached.

Equally, however, some Unionists suspect that signs of the O’Neill/Foster harmony will be seen as too cosy by old Republican backroom influencers interested in agitating the cauldron. Or to quote one unionist source, referring to the Sinn Féin HQ in Belfast: “When the boys in Connolly House get involved, that’s when things can go off the rails.”

Right now, the mood is cordial, but it should not be overplayed. While there is warmth between the two women, there is also a certain reserve. Yet, it is clear they are making the effort.

As to whether this is a fake conciliation, one senior Stormont figure dealt with that question very simply and, probably, accurately, “The thing is with Arlene and Michelle when they are getting on well together you can see it, when they are fighting they can’t hide it.”