Stephen Collins: The next election will be all about transfers

There is a long tradition going back almost half a century of transfers between Fine Gael and Labour. 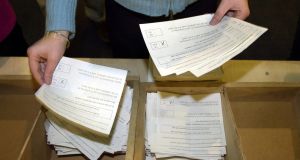 “In order to survive Labour TDs will have to get enough first preference votes to keep their heads above water for long enough to benefit from transfers.”

Sinn Féin’s attempt to promote an election transfer pact with other antiwater-charge campaigners highlights the important role vote transfers will play in deciding the outcome of the forthcoming election.

The Coalition’s ability to win a second term will hinge on disciplined transfers between Fine Gael and Labour.

Conversely, strong transfers between a variety of Opposition parties and groups could put paid to Enda Kenny’s prospects of making it back to the Taoiseach’s office.

There is a long tradition going back almost half a century of transfers between Fine Gael and Labour.

Fianna Fáil was ousted from power in 1973 after 16 continuous years in office because of a transfer pact between Fine Gael and Labour based on a joint manifesto. Even though Fianna Fáil increased its vote to a whopping 46 per cent in 1973, it lost office because the coalition parties matched it for transfer discipline and snatched a number of seats by tiny margins.

Fine Gael and Labour will need to do the same next spring if they are to make history and win a second consecutive term. Opinion polls, and the evidence of recent elections, indicate that Fine Gael transfers to Labour will be strong even if the favour is unlikely to be reciprocated to the same extent.

That will be particularly important for Labour as transfers from Fine Gael are likely to decide whether the party comes back with a respectable number of seats or suffers the meltdown predicted by polls.

Despite the importance of transfers it is worth pointing out that about 60 per cent of votes cast in a general election never go beyond their first preference, so getting a high level of lower preference votes is no use to a candidate who doesn’t get enough number ones to stay in the race.

Sinn Féin has developed a significant support base over the past decade and more, but because of its history the party’s progress had been hampered by its difficulty in attracting transfers.

This was highlighted in a unique study of the data thrown up by the electronic voting experiment in three constituencies in 2002. When the grand total of all preferences for the three constituencies was analysed it emerged that a disproportionate number of people did not give any preference to the Sinn Féin candidates.

Another feature of the Sinn Féin performance was that the party candidates got a far higher proportion of final preference votes than other candidates.

The data demonstrated how toxic the party was to a large swathe of the electorate. Things have probably changed since then in line with the growth in support for the party but the relative dearth of transfers cost it seats in the last general election. That is why it is in Sinn Féin’s interest to promote a transfer pact with far-left parties, even if some of them are not prepared to reciprocate.

Tensions will inevitably arise where Sinn Féin and its potential left-wing allies are in competition for seats, but a transfer deal still make sense.

One of the cardinal rules of PR STV is that a lower preference can never interfere with a higher, so transfers only come into play when the candidate who gets a voter’s first preference is either elected or eliminated.

If there are tight transfers between the two Coalition parties and also between Sinn Féin and the hard left one question is where that will leave Fianna Fáil.

In its heyday when it was getting between 40 per cent and 50 per cent of the vote Fianna Fáil scorned all talk of voting pacts with other parties and encouraged its supporters to vote the party ticket and then stop. This policy was designed to reinforce party discipline and eliminate any prospect of preference votes leaking out of the party fold.

In recent decades, since the party abandoned its “core value” of no coalition, the old discipline has waned and Fianna Fáil voters see nothing wrong with giving preferences to other candidates.

Its problem in the last general election was that virtually nobody else was prepared to transfer to Fianna Fáil.

Not only did the party’s first-preference vote go into freefall but its inability to attract significant transfers meant it got considerably fewer seats in the Dáil than its 17 per cent share of the vote warranted.

With so many Independents and smaller parties in the race the potential exists for Fianna Fáil to win preferences on the basis of geographical allegiance or local issues. It should also be able to pick up transfers from Fine Gael and Labour supporters after they have transferred to each other. Fianna Fáil could gain a significant number of seats with a relatively small rise in its first-preference vote once transfers come its way.

One way or another it will be a long count for everybody.