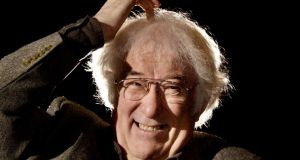 Heaney’s widow, Marie, was in the public gallery to hear all sides of the House praise the Nobel laureate.

Mr Deenihan said the respect in which he was held by the academic world and the Irish diaspora was unparalleled. “When Seamus travelled to Stockholm in 1995 to accept the most prestigious award a writer can receive, we were deeply proud of him.

“This was a formal recognition of something that was already well known, namely, that he was a writer of international standing and one of the greatest of our time.”

Marie Louise O’Donnell (Ind) said a fresh and a new wind had given Ireland the unique gift of Seamus Heaney.

“Poetry has always allowed the gods to speak and the poet and the poet-prophets and the poet-seers to be heard. Seamus Heaney was and remains our link between the gods and his human being sense of things.”

Mark Daly (FF) said he was one of the greats and was up there with all of Ireland’s Nobel laureates. He was “a wordsmith of monumental and global proportions”.

Eamonn Coghlan (FG) said it was not often that the announcement of the death of a literary figure could bring a country to a standstill, but such was the case when Heaney’s death was announced.

“No one was prepared for such a loss,’’ he added. “The familial connection and love that we felt for Seamus reverberated around the world as witnessed by the flood of heartfelt tributes.”