Mortgage approvals total 4,355 in August, up 4.1 per cent compared with a year ago 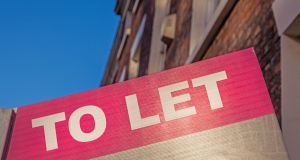 Outside Dublin, the standardised average rent reached €903 in the second quarter compared with €839 a year earlier.

Rents are continuing to rise with new figures showing a 7 per cent annual increase in Dublin in the second quarter to an average €1,713 a month, a rise of €114 compared with the same three months a year earlier.

On a quarterly basis, rents were up 3 per cent compared with the first three months of the year, according to the Residential Tenancies Board.

Its figures, which are compiled in conjunction with the Economic and Social Research Institute (ESRI), are based on actual rents paid on more than 19,000 tenancies registered with the board.

According to the data, the standardised average national rent for houses rose by €79 per cent annually to €1,164. Rent for apartments increased by €71 to €1,252.

Outside Dublin, the standardised average rent reached €903 in the second quarter, compared with €839 a year earlier.

At the end of the second quarter there were seven counties where the average rent either equalled or exceeded €1,000 a month.

Minister for Housing Minister Eoghan said the ongoing rent increases are not sustainable and that new properties coming to the market are contributing to rent inflation.

He said: “In our key employment areas, but particularly in Dublin, rents have reached unsustainable levels. This is precisely why the Government and Oireachtas moved to strengthen rent controls and renter protections in June of this year.

“We do need new rental properties and I welcome the more than 3,440 new tenancies created since the start of the year. This is an important turnaround on what was happening in 2018 when landlords were exiting the market. While it may be pushing rent inflation upwards, new supply will help those in housing insecurity.”

The figures come as Macroom and Carlow were yesterday designated as rent pressure zones, meaning that landlords can no longer increase rents by more than 4 per cent per annum.

According to Banking and Payments Federation Ireland (BPFI), which compiled the figures, the value of mortgages approved increased by 4 per cent annually to €968 million.

Some 2,227 of all mortgages approved in August were for first-time buyers. “We have seen significant volatility in monthly mortgage approvals figures over the summer months and July may have been an outlier but the latest approval figures indicate continued year-on-year growth in mortgage lending in overall terms. First-time buyers were again the fastest-growing segment, up 12.5 per cent by volume and 14.7 per cent by value,” said BPFI chief executive Brian Hayes. –Additional reporting PA