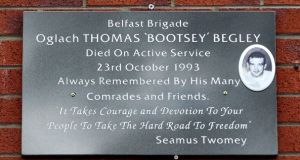 A plaque commemorates Shankill road bomber Thomas Begley in Belfast, Northern Ireland. It was erected in 2013. Begley died in 1993 when the bomb he was planting on the Shankill Road in Belfast exploded prematurely killing nine people and injuring more than 50. Photograph: AFP

The Northern Ireland Police Ombudsman Dr Michael Maguire has received a complaint that the RUC had information that could have prevented the 1993 IRA Shankill bombing in which ten people were killed, including one of the bombers Thomas Begley.

The complaint is being considered against the backdrop of a report that the IRA commander who planned the Shankill bombing was a police informant who notified his handlers of the plan to attack Frizzell’s fish shop on the Shankill Road in October 1993.

The short-fused bomb was aimed at members of the Ulster Defence Association leadership including Johnny Adair.

The UDA however had rescheduled the meeting which was to have been held in a room above the shop.

Ten were killed in the blast including Thomas Begley.

A second bomber, Sean Kelly was injured but survived the blast.

The Irish News reported on Monday that classified documents stolen during an IRA break-in at Castlereagh RUC station on St Patrick’s Day 2002 showed the IRA man at the time of the Shankill bombing was “working as an informant and passed information to his handlers that could have potentially prevented the atrocity”.

The newspaper’s security correspondent Allison Morris reported that the former IRA figure was now aged in his late 50s and that he also was a former “blanketman” who participated in the so-called “dirty protest” campaign for special non-criminal status for republican prisoners in the mid 1970s into the early 1980s.

The paper reported the stolen documents were heavily encrypted but that the IRA was able to decipher them. It led to the senior IRA figure being stood down by the IRA’s army council in 2002, it reported.

The Irish News said it had documents which showed the IRA commander was in contact with his handlers in the run up to the bombing and passed on details of “scouting missions” to the Shankill.

In the week following the bombing, the UDA and Ulster Volunteer Force killed 14 people in a series of revenge attacks. These included the UDA Halloween attack on the Rising Sun bar in Greysteel, Co Derry in which six Catholics and two Protestants were killed.

A spokesman for the Police Ombudsman confirmed on Monday that a complaint had been received which posed the question: “Did the RUC have information or intelligence that could have prevented the bombing and was the RUC investigation into the bombing compromised?”

“We have only just received the complaint. It now has to be assessed to determine whether it should and can be investigated and, if so, when that investigation could begin,” added the spokesman.

Separately the ombudsman Dr Maguire is investigating claims that the 2002 break-in at Castlereagh police station was “allowed to happen to protect an IRA informer”. The allegation was made by a former police officer.

The IRA escaped with sensitive RUC Special Branch files believed to be related to police officers and the republican and loyalist paramilitary informants that they handled. Millions of pounds had to be spent re-housing compromised officers and seeking to protect others threatened by the theft.