NUIG societies back campaign for equality for women lecturers 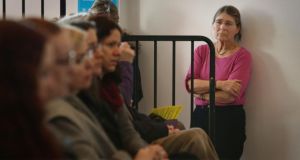 Some 25 societies at NUI Galway (NUIG) have backed a new campaign to demand equality for their female lecturers at the university.

The campaign, which was endorsed by scientist Dr Micheline Sheehy Skeffington, aims to lobby for equality “across the board”.

“Precarious labour is not only about gender,” NUIG feminist society auditor Patricia Prieto Blanco said at a lunchtime meeting to initiate the movement, attended by about 100 students and staff.

Dr Sheehy Skeffington, who won an Equality Tribunal case last year, said that students had a “unique opportunity” while there was “interest, energy and outrage” over gender inequality on the campus.

Some 54 per cent of NUIG lecturers are female, constituting the “highest percentage at any university”, she claimed.

However, only 13 per cent of professors and only 30 per cent of senior lecturers were female – the “lowest percentage at any university”, she said.

Some 85 per cent of the members of NUIG’s academic council, which appointed the president and the promotion boards, were male, she noted.

Dr Sheehy Skeffington, who took early retirement last year, told the student meeting that the university was “really concerned about its image, sponsorship, international rankings”, but “didn’t seem to care” about being ranked “second worse in Europe for the glass ceiling index (after Malta).

“Only when the university realises that treatment of women comes down to how much money it will get . . . then it will be forced to change.”

She urged students to write to the NUIG president and registrar and to distribute leaflets at a number of forthcoming events, including a special meeting of the university governing body later this month.

“In 10 years’ time, could we be the leading university that has tackled gender imbalance, and could we force other universities to do it, and could we be leaders for change in society,”she asked the meeting. She noted her grandmother, the late suffragette Hanna Sheehy Skeffington, had campaigned on the equality issue.

Ms Prieto Blanco said that equality was always perceived as a “problem for women”, when in fact it was about “equality of choice” for men and women to have a family-friendly working life.

Given the small percentage of companies in Ireland with female board members, universities “are no different”, she said – but “universities should be leading the way”.

“If students continue to be taught mainly by white middle-aged men, those structures are going to be repeated all over again in wider society,” she said.

Dr Sheehy Skeffington has pledged to use her €70,000 award to help five other female academics who claim to have been passed over for promotion by the college authorities.

As they have initiated legal action, they were not free to attend the meeting, Dr Sheehy Skeffington explained – adding that lecturer Mary Dempsey is also similarly constrained.

NUIG is appealing an €81,000 award which the Equality Tribunal directed that it pay Ms Dempsey last summer, after it found that she was discriminated against by the university on the grounds of gender, family status and disability.

It is understood that NUIG is at an advanced stage in establishing a task force to review the university’s existing policies and procedures on gender equality.

Earlier this month, trade union Siptu called for an external audit of “all aspects” of equality at NUIG by independent experts.

NUIG has said that it was clear from the recent Higher Education Authority report on gender division that “gender equality is an issue for the whole higher education sector in Ireland”.

The university says it has written to the Irish University Association and the Higher Education Authority to request that the Irish Human Rights and Equality Commission (IHREC) be approached to carry out an equality review of the entire sector.