Northern Ireland to set up ‘fan embassies’ at Euro 2016 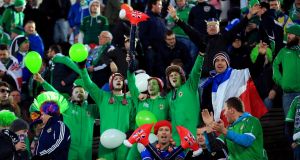 Northern Ireland supporters travelling to the Euro 2016 football championships in June will have their own “fans’ embassies” to provide assistance while the PSNI is also sending a delegation of officers to liaise with French police and Northern fans.

The Northern Ireland Supporters’ Club and the PSNI yesterday detailed how plans are being put into operation to try to ensure the tournament runs smoothly for the fans as they gear up to travel to France next month. PSNI superintendent Nigel Goddard is leading a team of officers who will work with both the supporters and the French police during the Northern Ireland games in Group C.

Northern Ireland are playing Poland in Nice on Sunday, June 12th, Ukraine in Lyon on Thursday, June 16th, and Germany in Paris on Tuesday, June 21st.

Supt Goddard said officers would be in France “to provide a reassuring presence at each of the venue cities and will be identifiable as PSNI officers to Northern Irish fans”.

“Whilst in France we will liaise with the French police commanders to monitor fan behaviour in the cities, fan zones, on transport and at the stadiums and assist them when required in dealing with any potential problems,” he said.

Supt Goddard said he had been liaising with the British National Police Chiefs Council, the Irish Football Association, the French authorities and other international law enforcement agencies to ensure fans enjoy a trouble-free tournament.