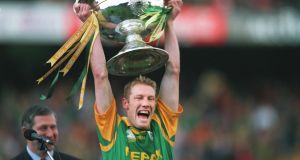 Former Meath footballer Graham Geraghty is offering a “large reward” after six medals were stolen from his home on Friday night.

The break-in happened at the family home in Athboy, Co Meath between 9.20pm and 12.30am while Mr Geraghty’s three children were in the house.

“They are not worth much in monetary value but it took blood sweat and tears to win these over a period of 11 years,” she wrote on social media.

Ms Geraghty said “a lifetime of memories had been taken” adding “we will gladly give you what the cash for gold shops will give you for them and more”.

She said they are offering a “large reward” for anyone who can provide information in relation to the burglary.

Gardaí said no arrests have been made and investigations are ongoing.