US man is suspected of membership of Atomwaffen Division, a violent far-right group 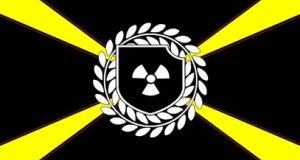 The flag of the Atomwaffen (Atomic Weapons) Division, a violent far-right group.

An alleged supporter of a neo-Nazi terrorist group was deported to Ireland by police in Berlin earlier this month, having tried to gain entry to Germany.

The 31-year-old man, identified in German media as “Kyle M”, is suspected to be a member of the Atomwaffen (Atomic Weapons) Division, a violent far-right group which was been implicated in several murders and planned terrorist attacks in the US.

The man, who is from the US, flew from Dublin to Berlin on November 7th before being sent back to Dublin by German Federal Police later that day.

It is not known if he was travelling from the US to Germany via a connecting flight through Dublin or if he had been living in Ireland.

His current whereabouts are also unknown. The Garda has yet to respond to queries on whether he was deported to the US or if he is still in Ireland.

Despite its small size - it is estimated to have less than 100 members in the US - the Atomwaffen Division is one of the most violent neo-Nazi groups to spring up in recent years.

It was founded in the southern states of the US in about 2015 and has branches or associate organisations in the UK, Canada, Germany and several eastern European states.

Its members have been implicated in murder, gun smuggling and planning attacks on US nuclear facilities.

According to reports in Der Speigel and Die Zeit, German police were tipped off by the FBI that Kyle M was travelling to Berlin via Dublin.

He arrived on an Aer Lingus flight at Tegel Airport on the evening of Thursday, November 7th. Federal Police detained he as he came off the plane and held him for questioning before putting him on a flight back to Dublin that night.

The man told the authorities he was in Germany for a holiday and to marry a German woman, police said.

German Federal Police did not return a request for more details on Sunday.

In 2018, right-wing extremists announced the establishment of a German branch of the Atomwaffen Division. Shortly afterwards, German police warned a US woman that she was under threat from members of the group who they believed had travelled from the US to attack her.