Two weeks before elections 50 visitors enjoy ‘an evening of refreshments, food and music’ 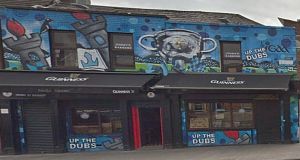 ‘This was an evening for the patrons of The Bridge Tavern, a pub I have drank in for 40 years,’ said Nial Ring. Photograph: Google Street View

The Lord Mayor of Dublin invited customers of four pubs from his electoral ward into the Mansion House two weeks before the local elections for “an evening of entertainment, refreshments, food and music”.

Nial Ring – who has already twice exhausted the free allowance of beer allocated to the Mansion House occupant – extended the invitation to the “patrons of The Bridge Tavern” in Summerhill, in Dublin’s north inner city, among other pubs.

“This was an evening for the patrons of The Bridge Tavern, a pub I have drank in for 40 years,” said Mr Ring.

The evening took place last Wednesday, May 8th, just over two weeks out from polling day in the local and European elections on May 24th.

Mr Ring has been Lord Mayor since June 2018 and is a councillor for the north inner city. Diageo provides 120 kegs of beer, about 10,560 pints, to the lord mayor’s office free of charge each year as part of a long-standing tradition. It is served to guests at events and receptions hosted at the Dublin city centre venue.

Mr Ring surpassed this free allowance in January and Diageo agreed to supply an extra 30 free kegs, although this also ran out in March. Dublin City Council then bought 71 kegs of beer for €15,280 after the second allocation ran dry.

Mr Ring has previously said he would be “horrified at any suggestion that I was using the bar in the Mansion House to buy votes”. He has previously defended his use of entertainment funds.

Dublin City Council added: “Patrons of four pubs were invited to the Mansion House on the 8th May – a total of 50 visitors in total. The other three pubs were the Annesley House, Cusacks and Mullets.”