The body of Captain Mark Duffy has been recovered from the cockpit of the Rescue 116 Coast Guard helicopter located on the sea bed near Blackrock island, 13km west of the north Mayo coast. Video: Keith Heneghan 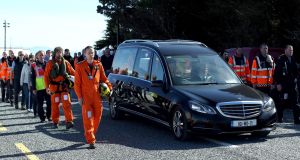 The body of captain Mark Duffy is driven in a hearse along the seafront accompanied by a guard of honour at Blacksod Co Mayo, Ireland, on Sunday. Photograph: PA 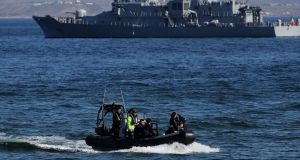 The body of Captain Mark Duffy is brought ashore at Blacksod Co Mayo after his body was recovered. Photograph: PA

The “black box” recovered from the crashed Coast Guard helicopter Rescue 116 is in sufficiently good condition to yield clues as to the cause of the fatal incident, investigators have said.

As efforts continued on Monday to raise the wreckage of the aircraft off the north Co Mayo seabed, the Air Accident Investigation Unit (AAIU) said it and its British counterparts were “confident” that data could be extracted by the end of this week.

This was despite AAIU chief inspector Jurgen Whyte saying there was some “slight corrosion damage” to some of the recorder’s contact points due to the length of time it spent in salt water.

The “black box” was retrieved by Naval Service divers on Friday during a series of descents to the wreckage in 40m of water off Blackrock island, 13km west of the Mullet peninsula.

It was flown at the weekend to the British Air Accidents Investigation Branch for examination and data download.

“We won’t do any download until we’re fully confident that it’s in the right condition to do so,” Mr Whyte told reporters at Blacksod pier.

So far, all that has been established by the AAIU is that a section of the helicopter’s tail struck rock on the island’s western end.

The aircraft was coming in to refuel in the early hours of March 14th during a tasking to provide “top cover” for its Sligo counterpart when it lost contact and did not issue any Mayday.

Diving operations were suspended on Monday night after five dives by the Naval Service team, and airbag lifting equipment has been partially attached to the wreckage.

On Tuesday, work on the seabed by the Marine Institute’s ROV to lighten the wreck section will continue and diving will resume. The lift is scheduled for 2pm, subject to seabed conditions.

The body Capt Fitzpatrick (45) was recovered shortly after the crash, while the body of co-pilot Capt Duffy (51) was removed from the helicopter’s cockpit on Sunday.

Capt Duffy’s body will repose at his home in Blackrock, Co Louth on Wednesday evening from 1pm to 7pm and his funeral is due to take place in St Oliver Plunkett Church, Blackrock, at 11am Thursday morning, followed by private cremation.

His family has asked for any donations to be given to the RNLI lifeboat service, and have said that “Mark’s wish would be for you to carry an organ donor card”.

Commenting on the wreckage find on the north side of Donegal Bay at the weekend, Irish Coast Guard operations manager Gerard O’Flynn said this was consistent with light debris being carried by prevailing south-westerly winds.

He said there was an extensive search in Broadhaven Bay, further north of Blacksod Bay, assisted by Civil Defence volunteers.

“The over arching mood is just sheer sympathy for the four families,” Mr O’Flynn said. “You have to be inspired by the work going on”, he said, noting that the Irish Coast Guard Sligo-based Rescue 118 helicopter had rescued a fisherman who had got into difficulties in the last 24 hours.

“Once resources are available, and once there’s evidence to mandate a search, then the search will go on,” he added.