‘Marie was a beautiful person . . . she had a heart of gold,’ Kieran Downey tells funeral 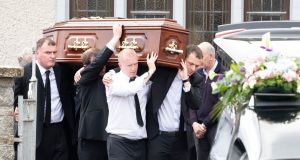 The heartbroken family of Marie Downey (36) and her infant son Darragh, who both died at Cork University Maternity Hospital (CUMH) last week, have “two special angels” watching over them, mourners were told at their funeral mass on Saturday.

Four-day old Darragh was laid to rest, cradled in the arms of his mother, at Castletown Cemetery, Co Limerick, following the ceremony in Ms Downey’s native Ballyagran.

In an emotional tribute to his wife and son, Kieran Downey told mourners, gathered at St Michael’s Church, Ballyagran: “Marie was a beautiful person, both inside and out. She had a heart of gold. She always put us first. We were her life and she was ours.”

“Herself and Darragh are our special angels now,” he said.

Mr Downey also recalled how the first dance played at their wedding was the Carpenters hit We’ve Only Just Begun.

“And, we had only just begun. We will love you and Darragh forever,” he said to a standing ovation.

Ms Downey, who played camogie for her native Ballyagran, as well as in Douglas and Kildorrery in her adopted county Cork, was remembered as a dedicated mother, wife and daughter, with an undying passion for sport, particularly Limerick GAA.

Hurling and camogie jerseys including those of Limerick, Ballyagran, Kildorrery and Douglas, were placed by her coffin as a symbol of her love of sport.

One of her many handbags was presented too as a symbol of her love of shopping, and, a framed photo of baby Darragh’s first meeting with his two big brothers, James and Sean, was also presented.

And in a poignant scene James carried to the altar two pink teddy bears, which he shares with Sean, to add to Darragh’s pink teddy, as a symbol of the everlasting bond between the three brothers.

Fr Joseph Shire, PP, Ballyagran, said they had all “gathered together in sorrow and sadness”.

“There is much that we don’t understand, so much suffering. We will never be able to understand why these tragic events take place, especially to very good people,” he said.

Addressing the devastation of the Downey and Cullinane families he added: “Ye had a beautiful healthy baby only this day last week and were celebrating a little baby brother for James and Sean. Kieran had a new addition to the family, as we say, a lovely family.”

“There was joy and happiness for (Darragh’s) adoring grandparents, Jim and Helen, Tom and Elma, and how soon this all turned from tears of joy to tears of pain and grief and devastation.”

Fr Shire said Ms Downey, who worked for Cork pharmaceutical firm Novartis, was dedicated to her family and her work.

“Marie was a lovely mother, wife, and daughter. She was a real lady.”

He mentioned how she had been thrilled when the Liam MacCarthy cup - won by her native Limerick last August - had recently visited her adopted Kildorrery, in Cork “where there is a bit of a (silverware) famine at the moment”.

Colleagues of Ms Downey and those of her husband Kieran who works in Teagasc, attended the mass as did members of Ballyagran Camogie Club who wore their local colours.

Fr Shire said Ms Downey always loved “coming home at weekends to see Jim and Helen, who both adored her and the boys.”

Investigations are continuing into the circumstances surrounding the deaths of the mother and son at CUMH. Minister for Health Simon Harris announced that an independent review of the death of Ms Downey and her baby would take place. A separate hospital investigation is also underway.

Ms Downey, who had epilepsy, was found dead in her single room and her newborn son Darragh lay critically injured under her last Monday.

It is thought she got out of bed and then suffered a medical episode, which caused her to fall and suffer fatal injuries. Baby Darragh received extensive resuscitation and was placed on life support but died the following day.

A joint inquest will take place at the Cork City Coroner’s Court at a later date.

At their funeral mass her husband thanked all those who had offered “great comfort and support” during the past few days.

A recording of We’ve Only Just Begun filled the church before the mother and son were brought together to their final resting place.