Head of the CIA turns up at Gathering event in Roscommon 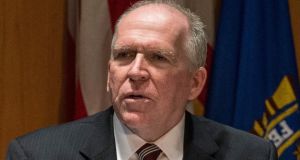 The head of the Central Intelligence Agency (CIA), John Brennan, was among the guests at a Gathering event in Kilteevan, Co Roscommon, last night.

Along with his 93-year-old father Owen, he attended a special homecoming for people from the village and those who had left it to go elsewhere.

The team organising the event first wrote to Mr Brennan in January this year but heard nothing from him. They assumed he wasn’t coming until they heard from his office on July 24th that he had accepted the invitation.

“We couldn’t believe it. Everybody thought it wasn’t possible,” said Eileen Fahey, the chair of the Kilteevan Community Development Group.

Mr Brennan travelled to Kilteevan in the company of his father and his brother Tom. “Isn’t a father coming home with his two sons the essence of what the Gathering is about?” Ms Fahey suggested.

Last night’s social, which was attended by several hundred people, was held in the Kilteevan community centre which used to be the local Catholic church. It is the building in which Owen Brennan was baptised on April 9th, 1920, according to the parish records.

He emigrated to the United States in 1948 and married an American woman. Their son, John Brennan, was born in northern New Jersey.

He was appointed director of the CIA in March by US president Barack Obama, who was impressed by his record as the head of homeland security and counterterrorism.

Mr Brennan was included in the now famous photograph of Mr Obama and his White House staff watching the operation that led to the killing of Osama bin Laden.

Speaking in Kilteevan last night, Mr Brennan said he and his family were part of the “great Irish diaspora”.

He said his father had passed down to his family the strong values of “family, community, love of nation and love of God.”