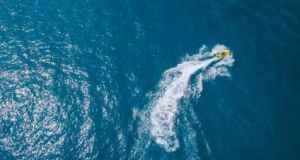 People have been finding it difficult to stay away from their boats and jet skis during the good weather, despite the coronavirus lockdown, according to sightings of marine activity on the State’s coastal and inland waterways.

The RNLI said it was tasked by the Irish Coast Guard at 9.35pm to assist in taking the jet skiers from the water between Newport and Rosmoney.

The waters are considered dangerous for even the most experienced mariners, with numerous sandbars and shallows in the bay.

The lifeboat crew worked hard to maintain social distancing as best as possible during the operation, which also involved the Garda and Coast Guard.

All three men were ultimately towed to Rosmoney Pier by the local owner of a rigid inflatable boat.

The lifeboat returned to its moorings, after refuelling, at 11.35pm, the Garda said.

In Lough Derg, gardaí confirmed the Garda Water Unit engaged with inland waterways users while on patrol on the lake, which lies on the Shannon Navigation north of Killaloe, at the weekend. The Garda Press Office said gardaí had been in the Terryglass area and had engaged with boat owners, but that “no issues have been reported”.

The engagement followed the sighting of sail boats in the vicinity of Garrykennedy at the southern shore of the Lough, roughly midway between Dromineer, Co Tipperary, and Mountshannon, Co Clare. Photographs of the sail boats were circulated on social media.

The Garda said it has adopted “a graduated policing response based on its tradition of policing by consent. This has seen Garda members engage, educate, encourage and, as a last resort, enforce.”