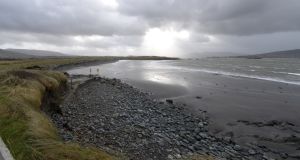 The farmer who found the body of Baby John on a beach in Caherciveen, Co Kerry has spoken about the horror of the discovery.

Jack Griffin told The Irish Times that at first he hoped what he had seen was a doll, “but deep down I knew it wasn’t”.

On White Strand, he pointed out the spot where he found the body of Baby John in April, 1984.

Mr Griffin, now in his 60s, was a well-known figure in Kerry running circles in the 1980s.

“I left the house here in the evening around 8pm to go down there for a run and I ran across the strand, and on my way across the strand - the rocks were there at the far side - to my right something caught my eye and I thought it was a doll first of all,” he said.

“It was pink in colour, face downwards with black hair and I thought to myself, it can’t be a baby. I was trying to say to myself it was a doll, but deep down I knew it wasn’t so I blessed myself.

“I was nervous but I went down to check it again before I went up to Brendan O’Shea, my wife’s nephew.

“Brendan was only 18 at the time and he was working on a car, but he said he would come back with me and we went back down the beach. He was braver than me because he tipped it and then we went into the barracks then and the guards came back – it was dark at this stage but we had torches.

“Then Tom Cournane, the undertaker, came and he christened the child. He called him John and he became known as Baby John. Tom called a priest . It was a bad enough shock to find a baby but then when we learned he had been stabbed, it was an even worse shock for people.”

Mr Griffin said he was surprised to hear that gardaí were starting a cold case review into the death of Baby John.

“It came out sudden yesterday evening about the cold case review. Thirty-four years is a long time and I suppose a lot of people have put it behind them and moved on, as it were, but it’s still a sorry sad story to think of that poor baby ending up on that beach down there.”