Families of Loughinisland massacre victims to ‘battle on’ 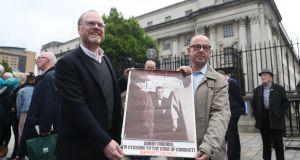 A man who lost his uncle and his great uncle in the 1994 Loughinisland massacre has vowed the families will “battle on” to get justice for the bereaved families now that the high court has ruled against the Police Service of Northern Ireland for arresting two journalists who investigated the massacre for a documentary.

Patrick McCreanor lost his uncle Dan McCreanor (59) and his great uncle Barney Greene (87) in the atrocity, in which six men died after a loyalist gang burst into a Co Down bar and opened fire.

“We want to see the police now pursue the killers,” said Mr McCreanor. “They should never have gone after journalists who were only doing their job.”

The North’s lord chief justice has said in the high court that there was no indication that two journalists arrested by Durham constabulary last August “acted in anything other than a proper way in protecting their sources” in relation to the documentary. He stressed that as well as having legal rights in this regard, they were also bound by the NUJ code of ethics.

Quashing the warrants used to arrest Trevor Birney and Barry McCaffrey, Sir Declan Morgan also ordered Durham constabulary and the PSNI to return all the material police unlawfully seized from them.

Birney and McCaffrey were, respectively, the producer and the reporter on Alex Gibney’s award-winning documentary No Stone Unturned about the Loughinisland atrocity. The high court found that police had no basis for seeking warrants to search and arrest instead of simply issuing production orders. “It is unclear to us what offence was being investigated,” the chief justice said. The issue of the warrants by judge Peter Rafferty was “inappropriate”.

The chief justice ordered the police to return the material without further examining it. He told the barrister acting for the police, Peter Coll QC, that if he was seeking permission for the police to retain material “you won’t get it from this court”. Mr Coll said it could take up to 14 days to do so. The chief justice questioned why it should take this length of time. “Hopefully your clients know where the material is,” he said.

However, he gave Durham constabulary until Monday afternoon to make a case for requiring more time. The material – millions of pages worth of documents, along with phones and computers – was seized in the course of a day on August 31st, 2018. Most of the material is unrelated to the Loughinisland programme and the journalists have expressed concern about the compromising of multiple confidential sources.

Barristers Barry McDonald QC and Gavin Millar QC, acting for the journalists, said their clients were willing to retain and to undertake not to destroy the returned materials for a period of up to 28 days to allow police to decide if they now wished to pursue production orders.

Mr Coll asked the court to allow police a longer period – until after the court produces its full written judgment in the case. He indicated that this was in the event that police might wish to consider appealing the judgment. However, the chief justice said the option was open to the police to seek to vary the high court order at a later date.

Outside the court, McCaffrey said police had seized “the work of 40 people in four separate production companies over 10 years”. He said the case had been “a farce” since the journalists had never had the original documents the police said they were seeking.

Birney said the arrests and raids had represented “another attack on the Loughinisland families”. He welcomed the high court ruling as “the correction of an injustice” but said the police now needed to pursue those responsible for the atrocity.

Birney called on the outgoing chief constable of the PSNI to abandon the case against the journalists. “He needs to look in the mirror and decide to call an end to this full fronted assault on the press,” he said. “This farce must end.”

The chief constable is set to retire from his post at the end of June. Durham constabulary said in a statement that it respected the court’s ruling. Its chief constable, Mike Barton, is to appear with the PSNI chief constable before the Northern Ireland policing board at its next meeting on June 6th.