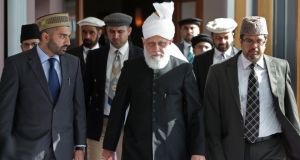 His Holiness Hadhrat Mirza Masroor Ahmad, centre, at the opening of the Maryam Mosque on the Old Monivea Road at Ballybrit, Galway. Photograph: Joe O’Shaughnessy

Europeans volunteering to fight for radical Islam are “misguided”, the world head of the Ahmadiyya Muslim community has said.

Fifth Khalifa His Holiness Hazrat Mirza Masroor Ahmad, who was in Galway to open his community’s first Irish mosque, criticised the “killings and bloodshed”, which conveyed a “negative image” of Islam.

Speaking to The Irish Times after the inauguration, the Ahmadiyya spiritual leader said he was “always upset” by establishment of any radical organisation fighting in the name of Islam, as he had been when al- Qaeda was formed.

“Nowadays the world is in total chaos,” he said.

During his one-hour sermon to inaugurate the Masjid Maryam or Mosque of Mary in Ballybrit on Friday, he repeatedly urged his community to pursue a path of “peace, love and humility” and to set an example that would allow the faith to grow.

Asked about last week’s estimate by EU counter-terrorism co-ordinator Gilles de Kerchove that 3,000 European citizens were involved in fighting in Syria, the leader said if they were from Muslim communities, they were “frustrated people”and “misguided people”.

“This is why the holy prophet forecast that a time would come when the name of Islam would be defamed by Muslims themselves,” he said.

It has been forecast that certain signs would herald a new reformer, he explained, and the Ahmadiyya community believed their head was this figure.

Up to 200 million strong

The fifth khalifa, or leader, who is based in London, is head of a faith founded in 1889, which is said to be up to 200 million strong in some 200 countries.

It has congregations in several African states, Indonesia and Pakistan, with up to 30,000 members in Britain and 15,000 in north America.

Killings and burnings of Ahmadiyya mosques have been rife in Pakistan since General Zia-ul-Haq’s administration banned them from identifying themselves as Muslims in the mid-1980s.

Some 60 of its community in Ireland are from Pakistan and are in the direct provision system, seeking asylum, with some waiting for up to seven years.

Some 16 of those attending the inauguration were Irish converts, including Imam Ibrahim Noonan, originally from Waterford, and Yusuf Pender from Quilty, Co Clare, who works as an IT analyst in Galway.

The community believes in non-violence and tolerance of other faiths, separation of religion and state and “jihad” or struggle by “the pen rather than by the sword”.

“Grá do chách, fuath ar dhuine ar bith” – as in “love for all, hatred for none” – is the hadith or saying inscribed in large silver letters on the Connemara limestone mosque.

Speaking in Urdu, which was simultaneously translated into several languages, the Ahmadiyya leader noted at the mosque inauguration that the world was seeing “two different types of Islam”.

“At one side, they see extremists engaged in fighting and bloodshed,” he said, and on the other side “a community working hard for peace”.

He urged followers to be “ambassadors” for peace.

The €1.5 million building, with its distinctive minaret, is fitted with a main prayer room for men only, but the community has plans to build a second floor for women and children.