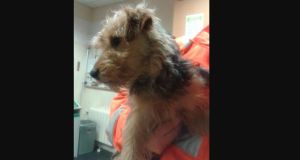 Not for the first time this year, a dog has taken a solo train trip into Dublin’s city centre, Irish Rail has said.

The dog joined the early morning commute on Monday, boarding the Dart on Dublin’s southside and getting off at Pearse station.

The dog boarded the train somewhere before the Sandymount stop between 7 and 7.30am.

The light-brown coloured dog is currently under the care of Irish Rail staff at Pearse Station.

This little customer boarded a DART on southside this morning and got off at Pearse, currently being looked after by station staff. Is it yours? #lostdog pic.twitter.com/vxJsYv2F55

It has no collar or identification, so staff are unsure if the curly-haired dog is a stray or someone’s pet.

An Irish Rail spokesperson told the Irish Times: “The dog is still in Pearse Station. No one has come forward yet to collect the dog.

“We have contacted the DSPCA and we are appealing for the owners to come forward to collect the dog.”

The unnamed dog follows in the legendary pawprints of another rail-riding pup. In April of this year, a dog, temporarily-named ‘Hamish’ by Irish Rail staff, journeyed from Kildare to Heuston on the Intercity route.

After an extensive online campaign and media coverage, Hamish (whose real name is Tyson) was reunited with his rightful owners.