Coveney: ‘Don’t confuse diplomatic language with weakness. We will support our boats’ 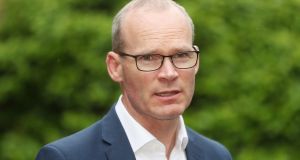 Minister for Foreign Affairs Simon Coveney has said the Irish Government was informed last September about Scotland’s intentions to enforce its claim to the territorial waters around Rockall. Photograph: Niall Carson/PA Wire.

Minister for Foreign Affairs Simon Coveney has said the Irish Government was informed last September about Scotland’s intentions to enforce its claim to the territorial waters around Rockall.

Mr Coveney said the Scottish external affairs minister Fiona Hyslop told him that Scotland would give Ireland a week’s notice when they intended to commence enforcement which was what they had done last week.

“We don’t recognise the Scottish claim on Rockall,” he told Newstalk’s Pat Kenny show on Monday. “Ireland hasn’t claimed sovereignty to Rockall. We don’t accept that a small rock is sovereign territory.” The issue now needs to be resolved and not allowed to build up, he said.

Government officials were in contact with their Scottish counterparts on Sunday in an attempt to ease tensions in the dispute over fishing rights at Rockall, which is some 400km off the Co Donegal coast.

Mr Coveney said it was hard to know what the motivation for Scotland was and that “it must be political”.

He added “this was Scotland’s decision, not Britain’s decision”.

Mr Coveney said he did not think that the Royal Navy would be enforcing the fishing zone.

“It is the Scottish Fisheries Protection vessels, but I understand that the Royal Navy will be there as back up if they need them,” he said.

“We are not going to escalate this to an issue between two European navies. We will have high level discussions to remove the heat.

Adrian McClenahan, the captain of an Irish vessel said the disputed waters are extremely important for Irish fishermen and vital for increased haddock quotas.

“I’ve been fishing here for years. I’ve been boarded by Scottish navy vessels many times. It has never been an issue before,” he told RTÉ’s Morning Ireland on Monday.

Mr McClenahan said such inspections were routine under EU regulations and his vessel had also been boarded by the Irish fishery patrols.

“I am fishing inside the 12 mile zone now. I feel it is my right. I don’t think the Scottish government has the right to ask us to leave.

“It’s a big gamble to take as it could put your whole business at risk, court cases could take years to resolve,” he added.

Mr McClenahan said that a number of Irish vessels had left the area as they were concerned and did not want to be detained or caught up in a legal case.

“We’ve been told by the Minister that we have a right to fish here. That we have the full backing financially and legally if one of our boats get detailed,” he said.

Mike Park, CEO of the Scottish White Fish Producers organisation said that since 2014 Scotland had the right to impose a 12-mile limit around Rockall.

“Scotland told the Irish government to make sure Irish vessels were aware of this, but they have ignored for years. Irish vessels have continued illegally fishing for years,” he said.

“This is not disputed territory in our eyes. The Scottish government warned the Irish government for years to have that respect. You’ve got to abide by the law. If there is a dispute it should be challenged in a court of law.”

Mr Park said the issue was not connected to Brexit as it goes back longer that than. “This is down to the intransigence of the Irish government,” he added.

Minister for Agriculture and Fisheries Michael Creed said Ireland had never accepted the UK’s claim over Rockall and that Irish fishermen were legally entitled to fish near the rock under EU law.

He said Dublin was ready to bring the dispute to either UN or EU courts to be resolved. Sending Irish naval vessels to protect fishermen there would, he said, result in “escalating” the dispute.