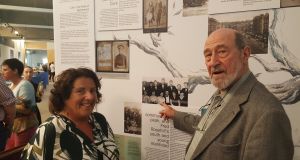 Claire Rosehill and Louis Marcus at the opening of The Tsar, the Rosehills and The music Shop in Cork. 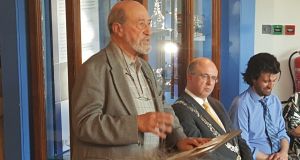 Louis Marcus at the opening of The Tsar the Rosehills and The music shop in Cork.

“It really is sad - to put it in very blunt terms when you end up as an exhibit in a glass case in a museum, you’re not going to feel great about it but in another sense it’s terrific that it’s here because it’s so important that people know there was a vibrant community here once upon a time.”

Barrister turned painter, David Goldberg is speaking about the Jewish community he grew up in in Cork in the mid-20th century as he surveys a new exhibition at the Cork Public Museum chronicling their arrival, growth and ultimate decline on Leeside over the course of more than a century.

Entitled ‘The Tsar, the Rosehills and the Music Shop,” the exhibition tells how Jews, fleeing persecution from the Imperial Russian territory of Lithuania in the late 19th century, arrived in Cork and made it their home, growing at its zenith to a community of more than 400 people.

The exhibition was opened by Oscar-nominated filmmaker and Cork born Jew Louis Marcus (80), whose ancestors left the town of Akmene - or Akmenon in Yiddish - in Lithuania to flee persecution and were among the first of the Jewish families to settle on Leeside in the 1880s.

“Obviously it’s very sad to see what your life once was is now history but it’s also very satisfying to think that Cork – the city council and the museum – have enough appreciation of the fact that we were part of the history of this city and left our mark her to mount an exhibition of this kind.”

“It’s obvious that our community was very well integrated into the world of the wider society which I think is an important thing to be said today when life is becoming multi-ethnic and it’s possible for small communities to remain true to their traditions and yet play a full part in the life of the city.”

The inspiration for the exhibition owes much to the Rosehill family, in particular, the late Fred Rosehill who kept the Synagogue on South Terrace open against all the odds and his daughter, Claire who handed over many of the artefacts to the museum when the synagogue closed in 2016.

Paying tribute to acting curator at the museum Dan Breen and Aileen O’Connor and Theo Dahlke of Heritageworks for their support, Ms Rosehill recalled how her late father decided to stay in Cork when many from his community decided to emigrate as numbers began to decline in the 1950s

“As he watched his contemporaries leave Ireland for other shores, he made a decision to stay and in doing so he became the custodian of the city’s Jewish community and maintaining a Jewish identity in the city became his passion,” she told the official opening attended by around 100 people.