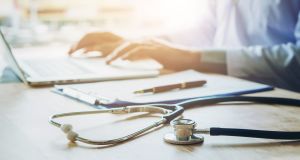 The review concludes that pay for hospital consultants in Ireland was competitive in comparison to the UK but behind that in the United States and Canada.

The department said it could be “reasonably argued” that when pay-restoration measures and the Government’s initiative to deal with the two-tier pay system in the public service were taken into account, “consultant pay rates in Ireland are becoming increasingly competitive with those in Australia”.

The review, which looked specifically at the years 2012-2017, states that the total consultant pay bill, including allowances , was estimated to be €531 million annually with doctors working on a range of different contracts.

It suggested that basic salaries ranged from about €123,000 to €190,000 depending on contract type and whether the doctor was appointed before or after salary cuts were applied in 2012. On average, there was a salary differential of some 32 per cent between those recruited before and after the cuts.

The department was strongly critical of the level of data available in the Health Service Executive on payments to consultants, saying estimates had been provided.

“The definitive number of consultants employed broken down by contract type and salary for 2017 is not available. This is striking given they account for approximately €474 million in basic pay annually,” the review states.

It said that due to the poor levels of consistent data across the public healthcare system, it was unclear if the consultant grade was being used efficiently to improve health outcomes.

The spending review said that “although the salaried income of a consultant in Ireland per average wage fell continuously from 2012 to 2016, it remained over three times higher than the average Irish working wage”.

It maintained that between 2012 and 2016 the gross salaried annual income of a consultant working in Ireland fell by 22 per cent but that Ireland was “starting from higher base-level salary than New Zealand and the United Kingdom”.

“In the years since 2016, consultant salaries in Ireland have risen 12 per cent, compared with a 3 per cent rise in New Zealand. Like in Ireland, consultants in New Zealand can work in public or private practice or a combination of both.”

In response, the Irish Medical Organisation said the spending review was “nothing more than an attempt to undermine the crisis we have in our health services and distract from the very simple fact that we cannot recruit enough consultants to treat patients in a timely manner”.

The Irish Hospital Consultants Association said two key findings of the review were that over the period 2012 to 2017 Ireland had a “lower density of consultants” in comparison to New Zealand and the UK and that the salaries of medical specialists appointed after October 2012 were up to 51 per cent lower than those in place before that date.