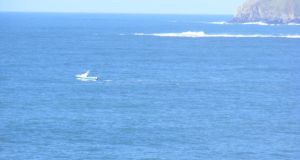 As efforts continue to deal with a Corrib gas outfall pipe which was dislodged after storms off the Mayo coast, fishermen have expressed concern about the State’s response.

The Erris Inshore Fishermen’s Association (EIFA) has questioned why the Environmental Protection Agency (EPA) had not sent its own officials to inspect the situation in Broadhaven Bay after first reports on Friday last.

The section of discharge pipe, described as 800m long “plastic ducting” by Shell E&P Ireland, detached from the seabed during heavy swells and was spotted by fishing vessels crossing Broadhaven Bay to Porturlin late last week.

The EPA, which confirmed it was investigating, said the company was “working to restore the dislodged pipe”, and continues to update it on progress.

The EPA added it did not believe there were any pollution risks as the pipe was transporting “mainly rainwater”.

“We don’t consider it necessary to send an inspector to view the pipe at this time,”the EPA said yesterday.

The discharge pipe is covered by an EPA licence, having been designed originally to carry emissions to sea from the Corrib gas terminal at Ballinaboy.

Erris fishermen campaigned to ensure contaminants were not part of the emissions transmitted in the discharge pipe, due to fears about the impact on the marine environment.

The EIFA secured a legal agreement with Shell in 2008 to pump emissions back into the wellhead 83km offshore, which required changes to the EPA emissions licence.

Shell has said that once an offshore team has assessed the situation, a remedial plan to “reposition the ducting on the seabed” would be carried out.

However, the fishermen have said it continues to pose a navigational hazard at a time when boats need to lay pots and gear at sea.