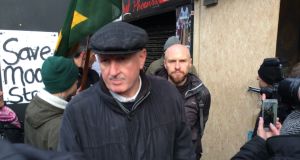 Campaigners who had been occupying historic buildings on Moore Street, Dublin, have vacated the properties pending the outcome of a High Court hearing.

They said any further occupation of the site would have been counter-productive and would have delayed the desperately needed repair and restoration of number 14, 15, 16 and 17.

On Thursday, demonstrators occupied buildings where the 1916 rebels had their last headquarters on Moore Street in a bid to have a protection order extended to adjacent buildings they say are also historically important.

The group was seeking guarantees that numbers 13, 18 and 19 would not be demolished. The Department of Arts, Heritage and the Gaeltacht said these buildings were “not historically important”.

Colm Moore, a nominee of the 1916 Relatives Association, has brought judicial review proceedings against the Minister for Arts and Heritage Heather Humphreys. He contends several buildings on Moore Street and Moore Lane are national monuments which must be preserved.

The hearing has been set for February 2nd and the protesters said they would vacate the properties until they hear the outcome of the proceedings.

Paul Kiernan, from Jobstown, Tallaght, who had been occupying the building since Thursday, said public support has been “fantastic”. He added that the protesters are prepared to re-occupy the properties if the High Court hearing goes against them. “We’ll be here waiting and if the decision doesn’t go our way there will be further action.”

On Monday, Dublin City Council adopted an emergency motion calling on the Ms Humphreys to rescind a Ministerial order that allows for the demolition of numbers 13, 18 and 19.

The motion also called on her to “work with the city council, 1916 relatives and all relevant stakeholders to implement an urban framework plan for the area bounded by Moore Street, Parnell Street, Henry Street and Upper O’Connell Street that will retain 10 - 25 Moore Street”.