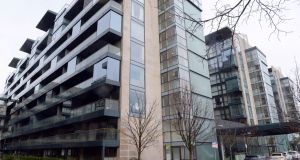 A fire has broken out at a south Dublin apartment complex which has been at the centre of a dispute over fire safety defects in its construction.

Dublin Fire Brigade said it had “fully evacuated” the apartments at the Beacon South Quarter development in Sandyford after it was alerted to the fire shortly after 8pm. Four fire engines and a senior fire officer attended the scene.

Apartment owners at the development last month voted to pay more than €10 million to fix fire safety and other structural defects at the complex, despite considerable opposition from owner-occupiers who said they could not afford the costs.

The vote followed a warning by Dublin Fire Brigade that owners could face legal action if they did not undertake fire safety works at their homes.

The city’s chief fire officer, Patrick Fleming, had written to owners to say the fire brigade had been alerted to “fire deficiencies” in the development, built in 2005 by developer Paddy Shovlin’s Landmark Enterprises.

The fire brigade ordered a detailed fire assessment to be carried out on all blocks.

It emerged last January that owners of the 880 apartments were facing costs of up to €15,000 each to fix the defects which include “a large number of fire safety deficiencies” according to a fire consultant’s report.

The fire brigade said it was too early to say what had caused the fire at the block on Tuesday evening.