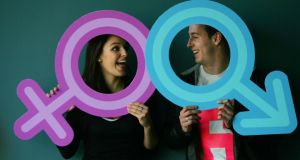 Republic of Telly comedian Fred Cooke said he couldn’t get over the fact that ‘there’s so much maturity in transition years’ when it comes to talking about sex.

Under the gaze of the austere portraits which adorn the walls in the Royal College of Physicians building in Dublin it was difficult for the young speakers to suppress their last-minute nerves.

There was the odd nervous laugh, the twiddling of hair and the occasional gnawing of nails. But such behaviour could be forgiven: after all it’s not every day 15- and 16-year-olds are asked to stand in front of their peers, their teachers and a judging panel and give a talk on love, relationships and sexual health.

Yet this is exactly what nine young essay writers and 11 young performers did tonight when they presented on the topic ‘What helps us make good decisions in our romantic lives?’ as part of National Sexual Health Awareness Week, an initiative sponsored by the RCPI and the HSE’s Crisis Pregnancy Programme.

As each of the teenagers took to the stage their nerves fell away as they presented their mature, informed and reflective views on love, relationships, teenage sex, the age of consent, the impacts of social media, the internet and television and a number of other topics.

The first speaker, Nicole Mullen from Largy College in Monaghan, quoted a Katy Perry song: “Let’s go all the way tonight/ No regrets, just love/ We can dance, until we die/ You and I, will be young forever”. However, the teenager dismissed Perry’s romantic lyrics as a rose-tinted view of sexual relationships whereas her own views were firmly based in reality.

“Whether parents like it or not teenagers are having sex,” she said. “In my opinion it is parental duty to teach your children about sex.” She also presented strong views on the importance of education: “In a world full of misinformation school has an important role to play,” she said.

Geoffrey Keating of Ardscoil Rís in Limerick said the key to romantic relationships were multi-fold: “If you truly love each other you will want to listen to each other, you will want to respect each other and you will want to come to what’s called a compromise where you take the best parts of both your opinions and put them to one good decision that satisfies both of you.”

In her talk Christy Biji, who won the essay category of the competition, discussed the findings of a survey she conducted in her school, Largy College in Monaghan as well as a school in India, examining the students’ varying takes on relationships. She concluded that cultural norms played a major part in shaping teenagers’ decision making.

Ruta Sevrukaite of St Louis Secondary School in Monaghan said sometimes teenagers could view multiple casual relationships as a badge of honour: “We as teenagers want desperately to belong, to be part of a group and, because of this we may end up doing what of our peers are doing, for better or for worse”.

But, she said, “in the end the best advice is not to be afraid of who you are and just to choose who you want to be with, not who others want you to be with”, ending her talk with a quote from Shakespeare: “to thine own self be true”.

Essayist Samuel Doyle from Mccartan’s College in Monaghan reflected on social media something he said “has the potential to be very positive, but sadly that potential is not being used”.

In another room eleven teenagers used artworks, song and dance performances to put forward their views. They included artist Kevin Daly from Ard Rís in Limerick, the winner in his category, who presented a painting depicting the male and female gender symbols in symbiosis.

“Trust and connection would be the key to a long-lasting relationship,” he said in summing up his painting. However, he added that giving each other space was also important in order to let relationships grow. “Let there be spaces in your togetherness,” he said, quoting The Prophet.

As the teenager took his seat, MC and Republic of Telly comedian Fred Cooke summed up the thoughts of every adult in the room: “I can’t get over that: there’s so much maturity in transition years,” the comic said in a moment of absolute seriousness.