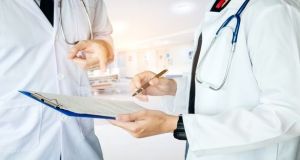 The Civil Liability Act gives legal protection in respect of information provided or any apology given during an open disclosure meeting with a patient or their family. File photograph: Getty Images

A proposal that clinicians and hospitals be required to inform safety and oversight agencies of incidents involving patients has been welcomed by the Ombudsman.

Publishing a progress report on the complaints system in the State’s hospitals, Peter Tyndall expressed concern, however, that there had been “no specific evaluation” of the open disclosure programme in acute hospitals, despite a statutory framework put in place last year.

Mr Tyndall said despite the fact that the open disclosure process was placed on a statutory footing at the end of 2017, the system remained “entirely voluntary”.

The Civil Liability Act gives legal protection in respect of information provided or any apology given during an open disclosure meeting with a patient or their family – in other words they cannot be used in any later legal proceedings as an admission of fault or liability.

It was also proposed that clinicians and hospitals will be required to inform the relevant safety and oversight agencies, such as the Health Information and Quality Authority, of incidents.

“This is a welcome development. According to the Final Report of the Scoping Inquiry into the CervicalCheck Screening Programme (otherwise known as the Scally report), the evidence suggests that currently a relatively small number of medical staff are taking part in open disclosure training. It also appears that no specific evaluation of the open disclosure programme and training in acute hospitals has yet been carried out,” said Mr Tyndall.

The Learning to Get Better: Progress Report examines measures taken to improve the complaints system in hospitals following the Ombudsman’s original examination in 2015.

The Ombudsman’s office conducted a review of complaints received since that year.

Mr Tyndall said this showed that many of the responses to complaints were “well-drafted, empathetic and, in some cases . . . clearly outlined the steps taken as part of the examination of the complaint”.

“However, unfortunately the review also showed that there is still a tendency on the part of the health services to adopt a defensive attitude and shy away from providing a proper explanation for what went wrong – in one case more details were provided to the complainant’s private insurer provider as to what happened than to the complainant.”

The report focuses on some areas that still need attention. But Mr Tyndall commended the HSE and the hospital groups for the “many improvements and initiatives that have taken place since 2015”.

Among the recommendations that have been implemented, the Ombudsman noted there was now a more obvious presence of complaints officers in the public areas of hospitals and there were also private rooms to facilitate meetings with service users.

Mr Tyndall said there was also a “much stronger focus” on front-line resolution in all areas of the HSE. An e-learning module had also been developed to assist all staff in resolving complaints.