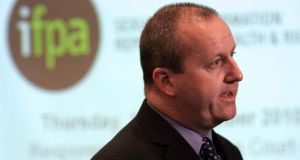 Niall Behan, chief executive of The Irish Family Planning Association (IFPA) said, “Not everyone in Ireland who needs abortion care can access it here at home; either because their pregnancy falls outside the law or because care is not accessible locally”. Photograph: Eric Luke / THE IRISH TIMES

Last year 375 women and girls left the Republic to access abortions in clinics in England and Wales, according to figures released by the UK department of heath.

There was an 87 per cent decrease in the number of women and girls that provided Irish addresses in UK clinics in 2019, down from 2,879 the previous year.

Abortion services became available in Ireland in January 2019. Overall, there were 2,135 abortions performed in England and Wales to women recorded as residing outside those two countries, a decrease from 4,687 in 2018.

Niall Behan, chief executive of The Irish Family Planning Association (IFPA) said, “Not everyone in Ireland who needs abortion care can access it here at home; either because their pregnancy falls outside the law or because care is not accessible locally”.

“At least one woman a day continues to travel abroad for abortion,” Mr Behan added. “These women and girls are from every county in Ireland. They should have been able to access care at home: we know that at least 65 of the 375 had a legal entitlement under the Health (Regulation of Termination of Pregnancy) Act 2018.”

Mr Behan said while “we should be proud of the way abortion care has been integrated into mainstream healthcare” in Ireland, the reality is women who do not meet the legal criteria for abortion “must endure the physical, emotional and financial burdens of travelling abroad for healthcare”.

“This is unacceptable,” he added. “The new government must ensure that the 2021 review of the abortion law focuses on enhancing access to abortion care so that no one is left behind.”

Cathie Shiels from the Abortion Rights Campaign said the figures “demonstrate clearly to those of us in the South that the compassionate care promised by politicians during the 2018 referendum has not materialised”.

“On the contrary, we have heard heartbreaking stories from those who believed they were entitled to a legal abortion in Ireland being forced to travel,” she said.

“Our new law puts doctors in the position of making impossible distinctions between ‘fatal’ and all other severe, complex, or life-threatening foetal anomalies, distinctions that are not rooted in medicine.

“With the threat of prosecution still hanging over them, many doctors are hesitant to make that distinction and so, as illustrated here by the UK DOH figures, many are still forced to travel to access the compassionate care we voted for in 2018.”

The Department of Health in the Republic said it was aware that some women are continuing to access services in the UK, “It is encouraging to note that there has been a significant reduction in the figures since the implementation of the Act last year. This demonstrates that the majority of women who require termination of pregnancy can access the service here”.

It added that the Health (Regulation of Termination of Pregnancy) Act 2018 permits termination to be carried out in cases where there is a risk to the life, or of serious harm to the health, of the pregnant woman; where there is a condition present likely to lead to the death of the foetus either before or within 28 days of birth; and without restriction up to 12 weeks of pregnancy. “The Act does not place any restrictions on a person’s right to travel to another jurisdiction to access lawful termination of pregnancy services there, should she so choose”.