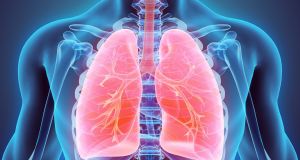 More than 20 Irish patients with severe lung disease have been told they can stay on a “life-changing” treatment for another month while talks continue on approving the drug involved.

The patients, who have genetic emphysema, were due to see their use of Respreeza – provided through a compassionate use programme – end next week but have been given a reprieve to the end of February by the manufacturer, CSL Behring.

An application to have Respreeza, which costs more than €100,000 per patient, provided for free in the Irish health service was rejected last month on cost-efficiency grounds.

The situation is similar to the ongoing row over Orkambi, an expensive treatment for cystic fibrosis which has also been rejected on cost grounds by the National Centre for Pharmacoeconomics (NCPE).

Price talks between the Health Service Executive and the manufacturer of this drug are continuing.

The patients on Respreeza have alpha 1 antitrypsin deficiency – also known as alpha-1 – a hereditary condition that is unusually common in Ireland.

Many were put on clinical trials from 2006 and, when these ended in 2010, a compassionate use programme.

The company has said it will end the programme but has repeatedly delayed the execution of this threat.

Research suggests 3,000 people have alpha-1 in its most severe form (though only 350 have been diagnosed); about 12,000 have a moderate deficiency and up to 250,000 people have a milder form of the condition with an increased risk of lung disease, particularly if they smoke.

The Alpha One Foundation, which runs a HSE-funded screening programme for the condition in Beaumont Hospital, Dublin says the treatment has been “life-changing” for patients.

“CSL Behring’s decision to fund the drug until February offers some temporary relief for patients, but it is a source of continuing worry and stress to live under these ongoing deadlines, and not to be provided with the assurance that their treatment will be funded into the future,” says the foundation’s Kitty O’Connor.

An additional 40 patients who were diagnosed after the trial ended are waiting to be put on the drug once it is approved, she says.

The NCPE analysis estimated it would cost €37 million over five years to provide Respreeza to affected patients.

This cost could double if it were found that doubling the dose of the treatment was beneficial.

Ms O’Connor says the HSE drug group, which is discussing the issue this week, should talk to affected patients before making a decision.

Coronavirus: Managing the surge in cases is a day-to-day battle