Coronavirus: Easing of overseas travel rules may be delayed 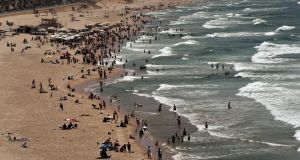 The planned easing of restrictions on overseas travel from next month could be delayed, Ministers in the incoming Government have signalled.

Under pressure from public health officials concerned about a possible resurgence of Covid-19 cases linked to foreign travel, key Ministers on Sunday urged caution in any loosening of the restrictions.

National travel restrictions are being lifted today in the latest phase of easing of restrictions in the Government’s “roadmap” out of the lockdown imposed due to the coronavirus pandemic, and a wide variety of shops and services are now allowed reopen, but the advice against non-essential foreign travel remains.

Last week, the outgoing government committed to compiling a “green list” of countries with low infection rates with which travel would be allowed from July 9th.

On Sunday, Green Party leader Eamon Ryan, the incoming Minister for Transport, warned against “turning on the taps” on foreign travel and urged the public to holiday at home this summer.

Mr Ryan said the new Government should continue to “heed the scientific advice” which has served the country well so far.

By staying at home for holidays this summer, the public can “put money into the economy”, help small businesses and look after their health, he told RTÉ’s The Week in Politics programme.

Warning of the possibility of a second wave or even third wave of infections, Mr Ryan said the opening up of foreign travel should proceed slowly.

Most Irish people had already “voted with their feet” by opting to holiday at home due to the possible risks, he pointed out. “I don’t think we should be turning on the taps of huge amounts of additional travel, particularly not in the coming months when it’s so uncertain.”

Mr Donnelly acknowledged the Government was committed to publishing a “framework list” of other countries with low infection rates with which travel could be permitted, but he insisted no decision has been made on when this list would be activated.

“We have to strike a balance to ensure businesses can continue but we also have to minimise the chance of a second surge,” Mr Donnelly said.

The way a list would operate would also have to be examined, he said, citing the example of Portugal, which has had a low level of infection until a spike recently.

The Minister for Health said he had already had discussions on the issue with chief medical officer Dr Tony Holohan, who said on Friday he was “more than nervous” about the prospect of the imminent lifting of overseas travel restrictions.

“What worries me most now is travel from overseas and I fear many planning foreign trips. 2020 is a year for a staycation. Stay in Ireland, spend locally and follow public health advice,” Dr Holohan tweeted at the weekend.

Covid-19: Five deaths and 15 new cases reported in State 19:26
All change at the unique Ashford Castle in era of Covid-19 19:20
Homeless man found dead in Dublin city centre 19:04
Free back-to-school resource toolkits aimed at families of children with autism 19:02
McDonald ‘would still go’ to Storey funeral if serving as taoiseach 18:12