Energy is not one of Ireland’s strengths: we import almost 90 per cent of our power, we’ve made little progress in renewables, and we’re at the mercy of an unstable global market. Where will Ireland get its energy in years to come? 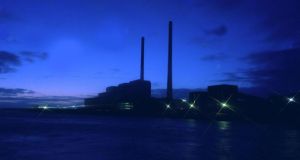 Besides worries about climate change and security of supply, Ireland faces a capacity issue. Photograph: Eirgrid

A nuclear reactor is unlikely ever to dominate the landscape of Carnsore, Co Wexford. In Co Leitrim not a single rock has been fracked – and none might ever be. Yet nuclear power and hydraulic fracturing are already in Ireland.

And although a large part of the population doesn’t want these two controversial power sources anywhere on the island, our purchase of their product is why energy is cheaper now than it has been for almost a decade.

Shale oil and gas derived from the fracking process have had an indirect but significant effect too. As the former minister for energy Pat Rabbitte puts it, “The shale-gas revolution has transformed the US, which is now heading towards self-sufficiency.”

The emergence of shale oil and gas has led to a dramatic fall in global prices, currently reflected in cheaper petrol in filling stations. The corollary has been less demand for US coal, and its price has also dropped on international markets.

The presence, even in a secondary way, of nuclear and shale in the Irish energy mix shows how complex and shifting this sector has become in a generation.

The simplicity and certainty of the energy supply in the first six decades of the State (with a hiatus during the second World War) are no more. Oil and coal were plentiful then. German engineers from Siemens-Schuckert came over in the 1930s to build a hydroelectric power station on the River Shannon at Ardnacrusha, in Co Clare. Later came the turf-burning power stations.

In the postwar years the Electricity Supply Board, arguably the country’s most impressive semi-State company, pursued an ambitious rural-electrification scheme. Only in 1977 was the last pocket of the country, the Black Valley, in the shadow of Macgillycuddy’s Reeks, in Co Kerry, connected.

But a series of oil crises, climate-change concerns, geopolitical tensions and wars have raised unsettling questions about the global energy picture, especially in the age of “peak oil”, the point at which the world reaches the maximum rate of oil extraction; after this that rate can only decline.

The questions that every country faces are particularly acute in Ireland because of our living on an island, being relatively isolated, and lacking indigenous energy sources.

Despite hyperbole about “unlimited untapped resources” off our coast, there have been only four gas finds, all of them relatively modest. The geology isn’t overly encouraging, either, according to experts.

Hydropower provides a measly 0.5 per cent of our energy. Other renewables, principally wind, provide just over 6 per cent.

We have moved on from 1990, when we were 98 per cent dependent on imported fossil fuel. But in 2013 the State was still importing nearly 90 per cent of its energy requirements, one of the highest rates in Europe. The UK, by contrast, imports only around a third of the energy it uses.

The mix has changed, with substantially less coal and peat – the last of the turf-burning stations are being phased out – and far more natural gas. Gas has much lower emissions but is still a fossil fuel. Demand fell by 18 per cent in recent years, because of the recession, which helped Ireland meet its Kyoto targets for emissions reductions.

Extra gas-powered generating stations in Tynagh, Co Galway, and Aughinish, Co Limerick, addressed that at the time. But a robust recovery might just repeat that experience, Rabbitte says, especially if alternatives have not progressed sufficiently.

The first concerted effort to tackle fossil-fuel dependency came when the Green Party entered coalition, in 2007, but the picture is still not pretty. “We are so dependent on fossil fuel that we are the most exposed of EU countries,” says Eamon Ryan, the Green Party leader and former energy minister. “It’s about 90 per cent; it was 95 per cent. We are not exactly in the comfort zone.”

Dr Rory Monaghan, director of energy-systems engineering at NUI Galway, agrees. He points, as an example, to poor energy-efficiency standards for houses during the boom. He also points to bad planning, which meant no district heating systems – these supply heat and hot water to all houses – or homes built close to public transport. “That horse has bolted,” he says.

Monaghan says that we are much more oil-dependent than average and that the natural-gas backbone to Ireland’s electricity generation is slightly unusual. “If you asked what is the big issue in energy [in Ireland] I would say that medium-term security of supply is the biggest. We do not have our eye on the ball yet,” he says. “We are exclusively tied to the UK on that front. Their North Sea reserves are running out. The centre of gravity of our imports will move further and further east. Fifteen or 20 years are the timelines we need to look at.

“If they are unchecked,” Monaghan warns, “it will put us into the position of Ukraine and Poland, which are reliant on an unreliable energy partner in Russia.”

Any conflict or dispute involving Russia or a big producer in the Middle East could have serious consequences for Ireland. A senior source at the Department of Energy notes that recent geopolitical conflicts in oil-producing countries have had a minimal effect on supplies. But the calm now will not prevent a future storm. If a crisis occurs in one of these states, Ireland has a 90-day stockpile for essential services but, beyond that, might find itself in trouble and scrounging for alternative sources. “There is a very real imperative that we reduce our dependence on fossil fuels,” says Minister for Energy Alex White.

That imperative is a stark one. The climate-change legislation being debated in the Oireachtas sets a target of a zero-carbon society by 2050. “That is no small shift,” says Eamon Ryan. “It requires a new industrial revolution that takes fossil fuels out over the next 35 years.”

The Government’s official policy direction will be announced in its White Paper on Energy, to be published in the autumn. White and the head of his department’s energy division, Ken Spratt, need to find complex solutions to equally intricate problems.

But even if all electricity came from renewables it would still comprise only 20 per cent of all our needs. (Transport uses most of our energy.)

Myriad initiatives have been announced; one thing they have in common is that they are costly. Relying on wind, for example, means big changes to the grid. A lot of the energy from renewables would come from the western fringes, where the national grid has been weakest, necessitating an investment of €3 billion to upgrade. (Against that, imported fuels cost more than €6 billion a year.)

That process has not been without problems. The required pylon networks have met fierce local opposition and are subject to an ongoing review by a panel. A new north-south interconnector, which Rabbitte says is vital for security of supply, is also involved in an adjudicative process.

Wind as an electricity source grew from zero in 1990 to 20 per cent by 2013. It is variable – there’s not much of it around a calm summer’s day – and poses challenges with storage. Ireland has two other potential renewable sources, ocean and wave, but each is a generation from being proven.

Experts agree that there is some potential with exploration, but Rory Monaghan says the prospects are not encouraging. The Corrib field will supply 60 per cent of gas needs for about five years and will have a lifetime of 15 years. There are no adjacent discoveries so far.

Former ministers Rabbitte and Ryan, and current minister White, don’t hold out hope either. “Anyone who thinks there is an oil or gas bonanza out there is living a deluded fantasy,” says Ryan.

The Programme for Government set a target of a million homes retrofitted with energy-efficiency measures, including solar panels and better insulation. There have also been pilots for smart systems that would allow households to contribute small amounts of energy that they had produced but didn’t need – from a domestic wind turbine, for example – to the grid. But they are costly, and the gains have been modest. (And there is no hope of a million homes being reached.)

Transport is another worry area. Today’s cars are more energy efficient and burn less fuel. But the Government’s big project was to have 20,000 electric vehicles on the road by 2020. So far there are 479.

As the Irish Times Motoring Editor, Michael McAleer, observes, range anxiety – to do with the number of kilometres a car can travel when fully charged – is a big issue, and sales will not go up until that is addressed. “Irish buyers are conservative,” McAleer says, “particularly when making investments involving tens of thousands of their hard-earned euros.”

The transcountry interconnectors play a small but significant part, with imported (mainly nuclear) energy from Britain comprising 1.5 per cent of the Irish energy mix in 2013. There are roles as well for biofuels, solar power and biomass, but they are what Monaghan describes as pieces of a larger jigsaw.

As jigsaws go it is complicated. The one thing that everybody agrees on is that, for reasons of both climate change and security of supply, we have to wean ourselves off our addiction to fossil fuels.