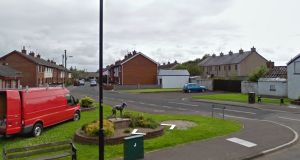 Police are investigating a shooting incident in Ballymoney, Co Antrim, on Monday night.

A man was taken to hospital following the shooting in the Mosside Gardens area at about 7.30pm. In a statement, the PSNI said an investigation is under way.

“Anyone who witnessed this incident or anyone with information about it is asked to call detectives on 101 quoting reference number 1841 of 22/02/21,” the PSNI said.

DUP MLA Mervyn Storey expressed his concern over the shooting.

“Over the last number of months there have been an increased number of such attacks,” he said.

“I have previously expressed my concern and that of the local community, that if there is not an end to these incidents, someone is going to get seriously injured or even worse.

“Whatever the reason and whoever is involved, I would urge them to bring this reign of terror to an end.

“Anyone with any information should give that to the police as a matter of urgency.” – PA