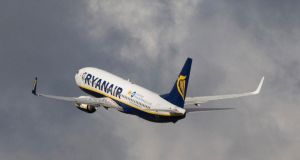 A Ryanair statement said: ‘The airline expects these funds to be repaid shortly, and has taken steps to ensure that this type of transfer cannot recur.’ Photograph: Chris Ratcliffe/Bloomberg

Ryanair has been hit by a criminal scam in which about $5 million (€4.6 million) was taken from one of its bank accounts.

The Irish Times has learned that the funds were removed from a Ryanair account last week by electronic transfer via a Chinese bank.

The fraud came to light on Friday and the Criminal Assets Bureau in Dublin was asked to assist in its recovery via counterpart agencies in Asia.

“Ryanair confirms that it has investigated a fraudulent electronic transfer via a Chinese bank last week,” the airline said in a statement on Tuesday night.

“The airline has been working with its banks and the relevant authorities and understands that the funds – less than $5 million – have now been frozen.

“The airline expects these funds to be repaid shortly, and has taken steps to ensure that this type of transfer cannot recur.

It is not clear precisely how the hacking scam was operated or who was behind it.

It is these funds that are believed to have been tapped in this illegal transfer.

CAB is understood to have used its connections with similar agencies in Asia to trace the money in an effort to help secure its recovery.

The Irish bureau is part of the Camden Assets Recovery Interagency Network, which aims to improve informal cross-border and interagency co-operation within the European Union and elsewhere.

The equivalent network in Asia-Pacific is the Asset Recovery Interagency Network Asia Pacific, based in Korea.