New anti-terror laws to be introduced 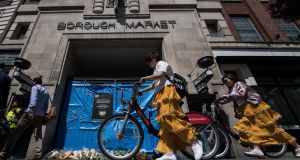 Flowers and messages outside Borough Market following a terror attack in the area in London. Photograph Chris J Ratcliffe/Getty Images

The State intends to introduce laws to make it a crime to travel to another country to engage in terrorism or join a terror group.

The laws will form part of the State’s implementation of an EU directive which requires member states to enact tougher anti-terror laws.

Ireland has yet to officially implement the directive of the European Parliament on combating terrorism but fully intends to do so, a Department of Justice spokesman said.

Under EU rules, countries have 18 months to adopt and implement the directive by passing relevant legislation.

Part of this legislation will include making it an offence to travel to another country to join a terrorist group or to commit a terrorist attack.

The organisation of such travel will also become an offence, “including through logistical and material support, such as the purchase of tickets or planning itineraries”, the directive states.

It is unclear how many Irish citizens have travelled to fight in conflict zones.

In 2015, Minister for Justice Frances Fitzgerald said about 30 people had travelled to conflict zones in Syria and Iraq from Ireland.

More than 5,000 EU citizens are believed to have travelled to the Middle East to fight for Islamic State and other jihadist groups.

The new laws mean Irish citizens who fight with terror groups can be prosecuted and jailed on their return to Ireland.

The EU directive will also require Ireland to introduce services and rights for victims of terrorism. These include immediate access to professional support services providing medical and psychological treatments.

Victims will also be entitled to free legal advice, as well as assistance with compensation claims.

The Department of Justice said it has already implemented much of the directive including introducing legislation against funding and recruitment for the purposes of terrorism.

“Some amendments to our existing law will be required to transpose the directive fully and these will be brought forward in the context of the ongoing process of review of our laws in this area,” a spokesman said.