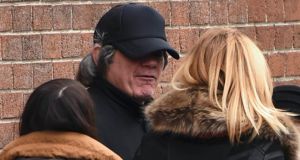 The murders and the seizures of drugs, luxury goods and firearms in the Kinahan-Hutch feud have generated significant media coverage and public debate over the past 18 months.

Regular but small operations by gardaí, which result in suspects being arrested and charged with serious offences and firearms seized, are chipping away at the factions but one feature cropping more frequently in feud-related investigations is a connection to Northern Ireland.

In a recent operation, a number of people connected to the Hutch gang were detained. A firearm was seized and sent for analysis. The event was over before news of it emerged, but it likely prevented bloodshed.

Gardaí believe one of two men was to be shot in Belfast by the Hutch faction with the seized gun.

The North is now increasingly proving a hiding place for criminals involved in the feud, and is acting as a transit territory in and out of Ireland.

Dubliner Gareth Chubb, a 30-year-old enforcer for the Kinahan gang, is one of two men gardaí believe could have been targeted with the recently seized gun.

He is currently the subject of a prosecution, on firearms charges, in Amsterdam. And news is imminent on whether a jail term is to be imposed on him for that offence.

He was arrested in Amsterdam in February. He had allegedly pointed a gun at a man in a cafe off Rembrandt Square. He was detained for almost four months, only being released in late May pending a decision on a possible jail term.

Gardaí believe Hutch gang members want to kill him before any potential overseas custodial term that might take him out of action is imposed. He has been hiding out in Belfast for the most part since returning from Holland.

However, the fact he is in Belfast is well known and he has been photographed by the media in parts of the city. On some of those occasions he has been with other Dublin criminals.

The other possible target of the recently seized gun was a man from the North who is suspected of shooting James “Mago” Gately in Dublin earlier this year.

Gately was wounded as he sat in his car on the forecourt of a garage in Clonshaugh, north Dublin, on May 10th. He was a close friend of Gary Hutch and a number of efforts have been made to murder him.

He has been hiding in the North in an effort to evade the Kinahan gang. A suspected conspiracy to send a man to the North to shoot him dead has already been foiled by the Garda.

Whether the Hutch faction wanted to shoot Chubb or the suspected Gately gunman is unclear. But the killing was to take place in the North – a most unusual feature for Dublin gangland crime.

With loyalist gangs controlling the drug trade Belfast has not been a territory explored to any great extent by Dublin gangs down the years.

But Garda sources say the level of violence in the Kinahan-Hutch feud has been so intense, with 12 murders in less than two years, that the men regarded as the key targets feel they must “run or be shot dead”.

“Some of these guys don’t have huge money. When their normal drug dealing and whatever else they are doing is interrupted because they have to flee Dublin, there’s no huge chunk of cash there to fall back on. So they don’t have the cash to run too far,” a source said.

The same senior Garda said travelling to the North to hide from other criminals was cheaper than, for example, fleeing abroad. And it also meant they could travel back to Dublin regularly to visit partners and children for periods.

“If they are not high-ranking people in the drugs world they will need to keep doing whatever job they are paid to do by the people running things – transporting drugs and guns or collecting money and selling drugs,” the source said.

“They can still manage all of that if they are in the North . . . If you are on the continent it’s not that easy.”

Another detective investigating the feud said the publicity surrounding the key players in the feud had become problematic for them.

“They are afraid if they travel in and out of Dublin Airport they’ll be spotted [by gardaí]. So some of them are travelling in and out of Ireland through Belfast; they think nobody will be keeping tabs on them.”

However, while they are becoming more familiar and comfortable with the North, there are also solid links between some of the feuding criminals and dissident republicans.

Those on the Hutch side have sourced firearms from dissidents in Belfast for use in the feud. And several republican paramilitary figures have featured prominently in the investigation of some of the Hutch feud activity.

An investigator said some of those on the Hutch side grew up with prominent republicans and engaged in cigarette smuggling and large-scale robberies with the aid of the Provisional IRA going back to the 1980s.

Two of the 12 men shot dead to date as part of the feud had very direct links to dissident republicanism.

The murder of Noel Kirwan (62) in Ronanstown, west Dublin, last December raised the prospect of dissidents becoming involved in the feud. Kirwan was an associate of the Hutch family but he was also linked to young men on the Kinahan side of the feud. Gardaí believe he was shot by the Kinahans because he was photographed with Gerry Hutch at the funeral of his brother Eddie Hutch, another feud victim.

Some of the young men Kirwan knew are active dissident republicans. And gardaí believe they may yet strike against the Kinahans in retaliation.

Another of the men shot dead on the Hutch side was Michael Barr. The dissident republican was gunned down by the Kinahans at the Sunset House pub in Dublin 1.

There is no evidence, as yet, that the killings of Kirwan or Barr have drawn dissidents directly into the feud in ways they were not already involved; supplying gunmen and firearms.

But the Garda has now foiled two efforts – one by the Kinahan gang and one by the Hutch gang – to carry out a gun murder in the North. And if blood is shed there as part of a mostly Dublin-based feud, events could spiral anywhere.