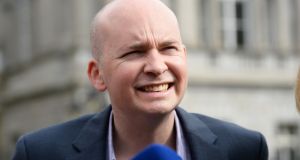 Solidarity TD Paul Murphy is one of the high-profile parties to have been granted legal aid in the recent past. Photograph: Cyril Byrne

The total expenditure was €53 million, with an allocated budget of €47.6 million last year, figures released by the Department of Justice to The Irish Times under the Freedom of Information Act show.

Criminal legal aid is free and is provided to those facing criminal charges who pass a basic means test. Given the high costs involved in defending even basic criminal charges, a majority of people facing such charges in Ireland are entitled to aid.

The department said the demand-driven nature of the criminal legal aid system makes it difficult to control costs.

Parties in high-profile and long-running cases, such as former Anglo Irish Bank chairman Seán FitzPatrick and Solidarity TD Paul Murphy, have been granted legal aid in the recent past.

The Criminal Justice (Legal Aid) Act 1962 states that people of “insufficient means” have a constitutional right to free legal aid in certain circumstances in criminal proceedings.

Legal aid is granted in all courts, including the District, Circuit and higher courts. The Department of Justice has no involvement in the granting of criminal legal aid or the assignment of solicitors.

Under the scheme, services are provided by private solicitors and barristers who have given notification of their availability to undertake such work.

Fianna Fáil justice spokesman Jim O’Callaghan said: “At a time when there is a lot of demand on resources, it is important that the legal aid bill is kept under control. Although it is a demand-based cost, it cannot be allowed in the future to exceed budget by these levels.”

In total, solicitors and barristers received just under €29.3 million through the scheme last year.

The best-paid barrister in the country last year through criminal legal aid was Michael Bowman SC, who only became a senior counsel in 2015. Mr Bowman received €478,557.

Covid-19 dominates entries for 2021’s virtual Young Scientist exhibition 00:01
Half hour of exercise offsets risks caused by sitting too long – WHO 00:01
Boy (4) left in hospital for over two years due to Tusla and HSE failings, report says 00:01
Dáil passes significant Bill aimed at mitigating impact of Brexit 23:44
Family fighting for Irish on gravestone in English churchyard to have legal bill covered 22:56