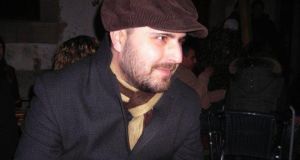 Saverio Bellante, who has been charged with the murder of Tom O’Gorman at his home in Castleknock, Dublin.

Friends of Saverio Bellante, the 34-year-old Sicilian charged with the murder of Dubliner Tom O’Gorman, have expressed incredulity that the Palermo man is accused of such a horrendous crime.

Speaking to the Live Sicilia website, one friend Vincenzo Lo Nardo said: “I have known him all my life, we grew up in the same rough area.

“Of our group, he was always the most sensible one, the guy with his head on his shoulders. He was never involved in any fights, never in anything out of the ordinary.”

Mr Lo Nardo, who grew up with Mr Bellante in the working class Palermo quartiere of Guadagna, also added a comment on his own Facebook page, writing: “I am gutted. I hope to wake up and find that this was all some horrid nightmare."

Mr Bellante, who worked as a customer services representative at Allergan Pharmaceuticals, studied at the University of Arezzo-Siena where he did a degree in the Ethics of Business, Consumerism and Social Responsibility.

The second of three children, Mr Bellante is the son of a Palermitan traffic policeman. Apparently proud of his Italian and Sicilian roots, Mr Bellante nonetheless expresses his dissatisfaction with modern Italy on his Facebook page, writing in an entry on January 6th: “Living abroad (and I hope not forever) you are reminded of how great it is to be Italian and even better to be Sicilian. When people ask me about it, I like to say that Sicily is simply an amplified version of Italy, with all its good and bad points. All the same however (living abroad) lets you understand the ‘dark night’ of our country and how our politicians are the worst expression of that dark night.

“For that reason, I invite all my friends to go and vote, even if the current political class and the current electoral law mean that you have to hold your nose when voting.

“I also ask people not to accept compromises even if they seem to lead to something good. We must continue to invest in ourselves as people, to invest in our studies and in our professional careers.

“Above all, we must not doubt that one day Italy will become the country we want, the country that we are building every day in every context in which we live. Let us support one another in the right choices, choices which require courage and which are often counter-productive. That is the only way that we will wake up and that the dark night in Italy will finally end.”

For the rest, Mr Bellante’s Facebook page contains nothing unusual. On the contrary, his page is similar to that of thousands of his contemporaries, with its mixture of photos, newspaper articles, cartoons and descriptions of meals.

The pictures, for example, range from one of Rathmines early in the morning, through to the Mondello beach outside Palermo and a picture of a wall slogan which reads ‘Fear Is A Prison’.

Amongst the newspaper articles are reports of the current major Mafia trial in Palermo, a trial which has been investigating an alleged “deal” between the Italian state and the Mafia in 1993 in the immediate wake of the assassinations of the two senior mafia investigators, Giovanni Falcone and Paolo Borsellino.

Just about every politicised Palermitano has followed this case with huge interest.

In answer to enquiries about Mr Bellante, the ministries of justice and of the interior, as well as Italian police and the Italian branch of Interpol, were all unable to comment. Palermo media sources, however, suggest that Mr Bellante had no criminal record.