London’s slavery victims, including an Irish woman, will need years to rebuild their lives 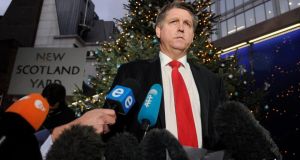 Detective Inspector Kevin Hyland said the three women were beaten and forced to live a life of “invisible handcuffs”.

For now she is known only as “the Irish lady”. Her first bid for freedom came in a call to a charity from a carefully hidden mobile telephone on October 18th “in whispered voice”, during which she was “incredibly distressed”.

The call, “the most harrowing ever taken” by a Freedom Charity volunteer, was spartan in detail.

“That she was being held against her will – and had been for 30 years – and that was almost all we could gauge in that conversation,” said the charity’s founder Aneeta Prem.

“I think she was worried about revealing any information at all. That was the first time that she had made contact with anybody asking for help,” said Ms Prem, adding that she had not realised then that the caller was Irish because she “didn’t get the accent at all”.

Safe house
Now in a safe house receiving care, the 57-year-old Irish woman, along with a 69-year-old Malaysian woman and a 30-year-old Briton, had spent more than 30 years in appalling circumstances, said the Metropolitan Police’s Cdr Steve Rodhouse.

“What we have uncovered is a complicated and disturbing picture of emotional control over many years. Brainwashing would be a simple term, but I think that that belittles the years of emotional abuse that these victims have had to endure.”

First call
In the first call the Irish woman had been asked where she was from, Ms Prem said, adding that the lady had replied “Ireland”, but said nothing more.

For now the Department of Foreign Affairs does not know her identity.

“Regarding personal details, we have not yet been given a name. Although the police have advised the Embassy that they are satisfied that one of the women is from Ireland, it has not been confirmed to us that she is an Irish citizen,” the Irish Embassy in London said.

For now, a family back in Ireland separated by more than 30 years would, if one exists, be a complication too far, since the women are vulnerable, distressed and only slowly coming to terms with a new life.

The first call from the Irish woman ended with a promise of more. Several happened in the days that followed. However, the telephone calls were organised against a backdrop of fear. Each of them was instigated by the Irish woman, who laid down when she could get free to call.

“We were very aware that she was very afraid of being caught on the telephone, that someone would find out,” said Ms Prem, who indicated that the calls were made when the Irish woman was out of the house.

Trust
Trust slowly built, said Ms Prem, who founded the charity three years ago. However, it was not a seamless journey. Following the first call, the three women panicked briefly, thinking that they had gone too far, taken too many risks.

“I think after the initial call there were second thoughts, about whether they were doing the right thing. It took a lot of persuasion and encouragement for them to come out, that it was the right thing to do.”

Slowly they calmed. “[We told them about] the outside world and that the future, and what it could potentially hold for them, would be a far better life than anything that they had experienced,” said Ms Prem.

The Metropolitan Police’s entire 40-strong human trafficking unit is involved, along with other detectives. On Wednesday, a couple, both aged 67, were arrested, questioned and bailed until January. They have been told to stay away from the Lambeth house.

Nearly 60 boxes of material, including 2,500 pieces of documentation, have been removed from “the unremarkable house”, said Det Insp Kevin Hyland, seemingly without neighbours realising the horror that existed in their midst.

In the safe house the women are slowly revealing their story. The allegations made against the couple are clear, said Cdr Rodhouse, “but the details of that need to be teased out and worked through patiently over a period of time at the pace of the victims”.

Jumping to conclusions
“The danger is that we jump to conclusions – it is dangerous to seize upon small details,” he told journalists in New Scotland Yard, who insisted nothing would be released that would identify the bailed couple.

However, they are not British nationals, and they were arrested in the 1970s, though he would not say if they were then charged or convicted.

‘Normal family’
“We believe at this stage to all extents and purposes to the outside world that this may have appeared to be a normal family.

“This does mean that over the course of many decades that the people at the heart of this investigation, the victims, would probably have come into contact with public services, including our own. That is something that we need to examine fully,” he said.

“We do not believe that they have been subject to sexual abuse; we know that there has been physical abuse, described as beatings. There’s nothing to suggest that the suspects were violent to others outside of the address.”

Secure in the safe house the three women are attempting slowly to come to terms with their changed conditions.

“They are finding the very fast pace of life very difficult to deal with, although I wouldn’t think it is particularly fast given where we have placed them,” said Ms Prem.

However, many steps lie ahead. “How long will it take? As long as it takes. I think it is going to be a very long process. Potentially years. It is going to be very difficult to rebuild their lives and establish new lives for them.”

Intimacy
Intimacy, meanwhile, is created in unusual ways. During one call Ms Prem’s pet shar-pei dog Diva was heard barking in the background by the Irish woman. Photographs of “the cutest dog in the world” were shared when the two first met in a torrent of tears.

Back at the Freedom Charity, the volume of calls, each of them treated as “a last chance”, has multiplied, including some from several other credible victims.

One of the easier ones yesterday came from “somebody who said that their cat was stuck up a tree and could we help”, said Ms Prem.