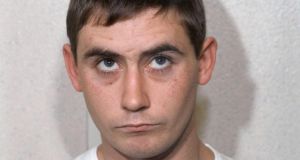 Scotland Yard photo from 2003 of Robert Hulme, now 34, who was one of six dissident Republicans freed from prison today. Photograph: PA Photo/Scotland Yard/Collect

Six dissident republicans transferred to jails here to complete lengthy sentences for conspiring to cause explosions in Britain have been released after bringing High Court proceedings claiming their detention was unlawful.

The State did not contest the applications for release, made in the wake of a significant Supreme Court judgment arising from differences in the Irish and British sentencing regimes.

Inquiries into the legality of the detention of three other dissident republicans are due before the High Court next week.

After the Supreme Court judgment of July 3rd last in the case of Vincent Sweeney, all six separately applied to the High Court for inquiries into the legality of their continued detention. Sweeney, of Ballytivnan, Co Sligo, was jailed for 16 years in England on drug charges, with six to be served in prison and six in the community on licence. All six argued the Sweeney ruling and the position adopted by the State concerning release on licence in other cases supported their claims for immediate release. The State was enforcing sentences imposed by the English courts not compatible with Irish law, they argued.

They were convicted in relation to a bomb attack outside the BBC television centre in Shepherd’s Bush, London in March 2001 and bombings of Ealing Broadway tube station in London and at Smallbrook, Queensway, Birmingham.