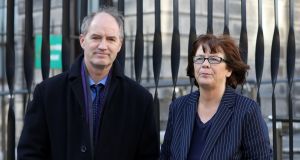 Pat and Mary Bennett, parents of Aoife Bennett of Naas, Co Kildare, at the Four Courts on Tuesday after the opening day of a High Court action taken by their daughter, Aoife. Photograph: Collins Courts

An anti-swine flu vaccine given to teenagers by the HSE in 2009 had never been tested on that age group, a major case that opened on Tuesday in the High Court has been told.

Aoife Bennett (26), of Naas, Co Kildare, claims she developed narcolepsy and cataplexy disorder as a result of being given the Pandemrix vaccine in school on December 10th, 2009 as part of a nationwide vaccination programme. She was aged 16 at the time. Her condition is a life-long one.

Age is a critical factor in the development of auto-immune conditions such as the one developed by Ms Bennett, her counsel, Dermot Gleeson SC, said.

Also there was a “booster” or adjuvant in the vaccine that had never been licensed for children before.

He said the case before the court was not that the vaccine should never have been used, but that the manufacturer and the State did not fully inform his client as to the risks involved.

They had an obligation “to tell the truth” so an informed decision could be made by Ms Bennett and her parents.

The vaccine was administered in response to a feared pandemic but the threat had peaked by the time his client was injected, and the vaccination programme had been ended in Northern Ireland.

His client would not have been given the vaccine “if she lived in Newry and not in Naas”.

Ms Bennett is suing the Minister for Health, the HSE, Glaxosmithkline Biologicals SA (GSK), which produced the vaccine, and the Health Products Regulatory Authority, which has responsibility for the approval of medicines. The defendants deny the claims.

“This is not an anti-vaccination case,” Mr Gleeson told Mr Justice Michael McGrath. “There is no message going out from this courtroom that people shouldn’t vaccinate their children.”

The court would be told, Mr Gleeson said, that after clean water, vaccination was the single most positive development in public health programmes.

However, he said the administration of the vaccine that Ms Bennett had taken was badly managed.

The GSK-produced vaccine caused approximately 1,000 children across Europe to develop narcolepsy, with approximately “75 to 100 of these children” being in Ireland.

Ms Bennett developed a rare condition that includes sleeplessness at night, an uncontrollable “collapse of the body” during the day, as well as changed eating patterns and weight gains.

Laughter, surprise and other emotions could spark the condition, with reactions such as the drooping of the head or the jaw, the court heard. Ms Bennett has to take naps during the day, and had to abandon her former athletic pursuits.

She has since completed her studies at St Patrick’s Teacher Training college and is now pursuing a masters degree. She has not been able to get a full- time job.

It was now known, Mr Gleeson said, that for those with a specific gene variant, the vaccine increased their chance of developing the auto-immune condition by up to 14 times. He said that Germany, Switzerland and Poland decided not to licence the vaccine, but it was administered in Finland, France, Sweden, the Netherlands and the UK in the context of a looming pandemic.

The court heard that Ms Bennett’s father, Pat, is a manager with the HSE who supports vaccination programmes and had himself received the seasonal flu vaccine two weeks ago.

Mr Gleeson said GSK made a profit of $2 billion from the product. There was a “de facto clinical trial on whole populations”, which might have been justified by the feared flu pandemic.

However the recipients were entitled to know this. GSK had insisted the governments that were going to administer the vaccine should sign an indemnity agreement. The first clause in the agreement referred to the fact that during pandemics, health authorities were likely to understate the warnings that would otherwise be associated with a product.