Sharon Shannon and her manager agree to withdraw from house sale 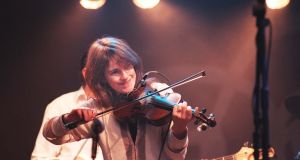 Receiver Ken Tyrrell claimed a Galway auctioneer, who had been instructed to sell the property before the receiver was appointed, was continuing to get instructions from Sharon Shannon (above) and her manager, John Dunford. File photograph: Frank Miller

Musician Sharon Shannon and her manager, John Dunford, have agreed before the High Court to withdraw from the sale of a house and studio property in Co Galway which a receiver has been appointed to take over.

Receiver Ken Tyrrell had sought an injunction against Ms Shannon and Mr Dunford who own “Poet’s Corner” in Craughwell. It has been valued at about €275,000, the court heard.

Mr Tyrrell claimed there was interference by Ms Shannon and Mr Dunford, as well as by two tenants occupying the property, since he was appointed receiver last February. The case against the tenants, who were not in court or represented, has been adjourned.

Mr Tyrrell was appointed by Sheldon Property Finance (SPF) on foot of an outstanding €513,000 debt owed by Ms Shannon and Mr Dunford who in 2015 consented to judgment against them over a Permanent TSB loan. The loan was later taken over by SPF.

Mr Tyrrell claimed a Galway auctioneer, who had been instructed to sell the property before the receiver was appointed, was continuing to get instructions from Ms Shannon and Mr Dunford.

He also claimed the tenants were attempting to play off the receiver against the owners which meant rent is not being paid on the property.

Mr Dunford, representing himself and Ms Shannon, said there had been no interference with the receiver or collusion with the tenants. He had only had one phone conversation with one of the tenants and had never met or spoken to the other.

He had told one of the tenants he and Ms Shannon were disputing the validity of the receiver’s appointment. While they had not brought any proceedings challenging the appointment, they welcomed the case being brought by the receiver and intended bringing a counter-claim, he said.

Following questions from Ms Justice Leonie Reynolds, Mr Dunford undertook to instruct the auctioneer to remove the property from the market, including taking down any signs, internet and other advertising, by 5pm on Wednesday.

He also agreed not to interfere in any way with the receiver.

On the basis of those undertakings, the judge said, that appeared to deal with the matter until it comes to full trial.