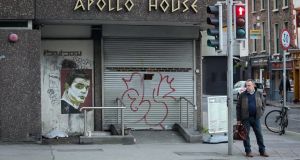 The High Court has dismissed an application by the occupiers of Apollo House in Dublin city centre for an extra week before they have to leave the building.

The judge said that, while he sympathised with the plight of the homeless, the court had already found that the occupants had no right or entitlement to be on the premises.

Any issue about the quality of accommodation for homeless people was “a matter for Government” and “not one for the courts”, the judge said.

The building, which is located on Tara Street and Townsend Street in Dublin, was taken over by activists under the Home Sweet Home (HSH) coalition and offered as accommodation to the homeless in December 2016.

Last month at the High Court, Mr Justice Gilligan gave the occupants until noon on Wednesday to vacate the property.

Shortly before the deadline was due to expire, Ross Maguire SC, for the occupants, asked the court for a seven-day extension.

Counsel said that while his clients had tried to comply with the order to vacate, issues over the suitability of alternative accommodation for the residents had arisen.

Counsel said one of the problems was that assurances about the immediate provision of suitable alternative accommodation given to the HSH coalition by the Minister for Housing Simon Coveney had not been delivered.

Mr Maguire SC, appearing with Michael Lynn SC, represented four of the HSH activists, including musician Glen Hansard, trade unionist Brendan Ogle and activists Aisling Hedderman and Carrie Hennessy, who are all members of the Irish Housing Network group, which is part of the coalition.

The application for an extension was opposed by the Nama-appointed receivers who own the building.

Rossa Fanning SC, for the receivers, had said the court should not entertain the application for a further stay due to a dispute over the quality of alternative accommodation.

He said the case was about the property rights of the lawful owners, and the court had already found that the occupiers were trespassers.

Counsel said the receivers had been in contact with the Dublin Region Homeless Executive and the Peter McVerry Trust and were satisfied that there are places available for all those in Apollo House “tonight”.

The court, counsel said, could not get involved in what was “a political issue outside the proceedings”.

The judge, who said he “admired” HSH’s campaign to help the homeless, said that court had been clear in its judgment last month and that the receivers were entitled to possession of the building.

He said that “ample time” and “a more than generous stay” had been given for the occupiers to vacate a building they have no right to be in.

The court said it did not want to give the impression that it would take “a benevolent attitude” in cases where buildings or public-owned buildings are occupied illegally.

That would be an intolerable situation in a democratic society, he added.

He said the case relates to private property rights.

He agreed the court could not get involved in a debate about the suitability of the alternative accommodation that was on offer.

The judge also said that it was wrong to criticise Mr Coveney, as he was not a party to the proceedings.

Following the judge’s decision to dismiss the application for an extension,, Mr Fanning asked if an assurance could be given that the building would be vacated before the case returns before the High Court on Thursday.

In reply, Mr Maguire said he could not give such an assurance.

The case will return before the judge on Thursday morning.

The eviction order had been sought by Tom O’Brien and Simon Coyle of Mazars, who were appointed joint receivers over the building by a Nama-related company, Nalm Ltd, in 2014.

Nalm Ltd had acquired loans advanced by Anglo Irish Bank to the building’s owners Cuprum Properties Ltd, who had defaulted on borrowings of approximately €357 million.

The building forms part of a block due for re-development. The receivers want to sell the property.