Ex-girlfriend says Mark Nash was a ‘fantasist’ who told lies 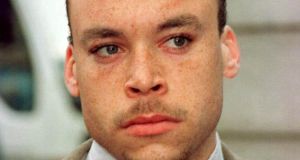 Mark Nash has pleaded not guilty at the Central Criminal Court to the murder of Sylvia Shields (60) and Mary Callanan (61) between March 6th and March 7th, 1997. Photograph: Collins Courts.

An ex-partner of a man on trial for a 1997 double murder has given evidence that he was a fantasist and “told a lot of lies”.

Mark Nash (42) who has last addresses at Prussia Street and Clonliffe Road in Dublin, has pleaded not guilty at the Central Criminal Court to the murder of Sylvia Shields (60) and Mary Callanan (61) between March 6th and March 7th, 1997.

Lucy Porter, originally from the UK and who was in a relationship with Mr Nash in March 1997 gave evidence on Friday.

She told counsel for the State, Brendan Grehan SC, that she was living with Mr Nash and their child in Prussia Street in Dublin 7 in March 1997, having moved to Ireland with Mr Nash five months earlier. Their baby was born in November 1996.

Ms Porter told the court that she worked “quite a lot of nights and irregular shifts” in Eddie Rockets on O’Connell Street.

On Thursday March 6th, 1997, Ms Porter was working in Eddie Rockets and Mr Nash was attending a charity quiz at the GPO on O’Connell Street. Their baby was been minded by the girl who lived downstairs in their flat on Prussia Street.

Ms Porter told the court Mr Nash, who was working at a sales company at the time, came into Eddie Rockets with two male work colleagues, after the quiz, sometime after midnight. After spending half an hour in Eddie Rockets, Ms Porter went to the shop with him, before he walked home to Prussia Street.

“I went to the shop with him and he got him some cigarettes and he started walking, it was only about a 20 minute walk from the city centre. I think he had no money so that’s why I bought him cigarettes,” said Ms Porter.

Ms Porter told the court he was wearing a “velvet jacket” on the night.

Mr Grehan asked her did she remember ever taking the jacket for dry cleaning and she replied saying “at some point” in 1997.

The prosecution also asked the former girlfriend about black caterpillar boots Mr Nash was wearing that night and Ms Porter replied saying they bought them together in a shop in Dublin in 1996 or 1997.

When she got home from work about 7am on March 7th, 1997, Mr Nash was in bed and she doesn’t recall anything unusual. She told the court that Mr Nash had picked up their daughter from the babysitter downstairs.

When asked by Mr Grehan if she was aware of the two women found dead in Grangegorman 18 years ago, she told the court it was pretty close to where they were living. “I don’t think I realised how close it was at the time, I didn’t know the area well,” said Ms Porter.

Ms Porter said she recalled Mr Nash making a comment about the murders when he saw something on the television and said “something like, what kind of a place had we moved to or along those lines.”

When asked by Mr Grehan if she had noticed a change in Mr Nash’s behaviour, she told the court how her former boyfriend, who did not like showering, started to take showers more often, up to three times a day.

Hugh Hartnett SC, for the accused, asked the witness was it because their relationship was sexually in decline and he may have been having sex with other people, could this be the reason for the additional showers.

“He was having sex with quite a lot of people since we were living in the UK,” replied Miss Porter.

Their relationship ended shortly afterwards and Mr Nash then moved out of their flat in Prussia Street in April or May 1997 and moved in with his new girlfriend Sarah Jane Doyle.

When it was put to her by Mr Hartnett SC that Mr Nash was somewhat of a “fantasist”, she agreed he was.

“What do you mean a fantasist?” asked Mr Grehan in re-examination.

“He told a lot of lies not just to me but to everyone I think,” replied Ms Porter.

The second witness of the day was Audrey Leonard who worked on reception in a sales company where Mr Nash also worked at the time.

Ms Leonard told Mr Grehan she remembers going to the table quiz in the GPO on O’Connell Street in early March, as she was on a team of four with the accused.

Ms Leonard then told Mr Grehan she recalls Mr Nash was drinking on the night and was “quite drunk”.

When the quiz ended after 11pm, she told the court how Mr Nash wanted to go to Eddie Rockets to see Ms Porter but she was keen to go home. The following day she started work at 8am and Mr Nash was the next person in after her.

“Mark was late quite often and I thought with the night he had, the night before he would be in quite late,” Ms Leonard told the court.

After lunch, cross examination of James McHugh, former assistant commissioner of An Garda Siochana with responsibility for the South East region in 1997 was continued by Mr Hartnett.

Mr McHugh said he did not know in 1997 that Mr Nash had a reputation of being a fantasist.

Mr Hartnett asked Mr McHugh should this fact have been brought to his attention.

Mr McHugh replied: “If that was known by gardai, it should be a matter that be brought to my attention.”

Mr Hartnett put it to Mr McHugh, concerning the “factually inaccurate” statements given by Mr Nash in relation to the layout of the house in Orchard View, Grangegorman.

The defence counsel also questioned Mr McHugh on the “classic garda speak” apparent in Mr Nash’s statements, which were taken in Mill Street Garda station in Galway in August 1997.