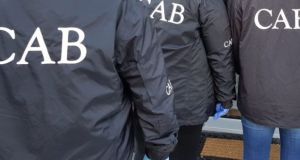 Gardaí in Cab were investigating a sum of €210,000 owed by Moorehouse to Revenue. File image: An Garda Síochána

A Wexford man has been jailed for a year for making threats to Criminals Assets Bureau (Cab) officers who were pursuing a tax bill.

At that time, detectives were investigating a sum of €210,000 owed by Moorehouse to Revenue.

Just €12,000 of this had been paid off when a Cab officer – identified only as Officer 80 in court – rang Moorehouse.

Wexford Circuit Court heard how the accused became irate with her and threatened that the next time she and her colleagues came to his home he would get a gun and shoot them.

The following month Cab officers, local garda detectives and the sheriff arrived at Moorehouse’s home and seized trailers, vehicles and a mobile phone.

In July 2019, a detective sergeant involved in the raid was back at his desk in Harcourt Square, Dublin, when he had a phone conversation with Moorehouse.

The sergeant gave evidence that the accused told him “you will die roaring”, adding that he should worry about himself if he attended a court case.

Judge Cormac Quinn was told that Moorehouse said Officer 80 “might not be around over what she said about me”.

This was interpreted by the witness a a direct threat intended to intimidate.

Pleas of guilty were offered to the two charges and the defending solicitor offered an apology. No firearm was ever found.

Counsel suggested that Moorehouse might have been under the influence of alcohol and that the call to Officer 80 occurred shortly after the death of his sister.

Concurrent sentences of two years each were imposed, the final year to be suspended.