Casino not compelled to pay €11,000 roulette win under law 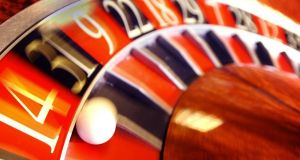 There is no legal guarantee in Irish law that gamblers will be paid their winnings, a judge in the Circuit Civil Court has said. Photograph: Danny Lawson/PA.

There is no legal guarantee in Irish law that gamblers will be paid their winnings, a judge in the Circuit Civil Court has said.

Judge Francis Comerford made the ruling in an action brought by Sayed Mirwais against Automatic Amusements Ltd, which trades as D1 Casino, and also against casino director Michael Donnelly.

Mr Mirwais, represented by John Smith BL, had claimed that D1 Casino, of Lower Dorset Street, Dublin, had refused to pay him €11,713 he had won after placing several bets on an automated roulette machine.

The court heard that after he won a further €6,713, Mr Mirwais was told by a manager to cash out. When he went to the cashier counter he was told the casino had no more cash for the night but that he would be paid the following day. He had also been told that an engineer would later check the roulette machine.

He claimed he was allowed to continue playing on the roulette machine in the hope he would lose and the casino had no intention of paying him if he won. He said it constituted an unfair commercial practice.

Liam Bell BL, for the casino which delivered a full defence to Mr Mirwais’ claim, said there had been a “suspiciously high amount of money lost by the roulette machine”.

Mr Mirwais denied that he found a flaw in the machine which allowed him to play even though the screen indicated ‘no more bets’ could be placed. The casino also claimed that he had been “under observation”.

The casino alleged that Mr Mirwais changed the screen layout from single to double play mode in order to switch a bet which had been placed in a previous game, enabling him to place a bet when the roulette ball had already settled. It had been unaware of the malfunction of the machine.

Mr Mirwais, an Afghan refugee who qualified as a doctor in his home country, had the night before the incident lost €9,000 in the same casino, the court heard. He said he had won the money “fairly and squarely.”

“When I was losing my money, the machine was ok and the casino was happy to take it, but when I won, they wanted to investigate,” he told the court.

Judge Comerford said one needs to have considerable trust to put a bet on an automated machine when one cannot see what is happening. The judge said that he had to rely on the Gaming and Lottery Act 1956 which states that “no action shall lie for the recovery of any money or thing which is alleged to be won.”

“If you happen to be too lucky while placing a bet or gambling, the person can simply say ‘no you’re not entitled to the money’. That is simply the law in Ireland,” the judge said.

He dismissed Mr Mirwais’ claim and refused an application by the casino for their legal costs on the basis that they had only furnished, by way of discovery, 10 minutes of CCTV footage of the night in question.