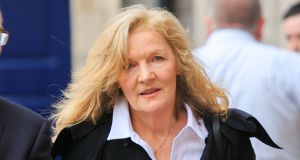 Harris told the Charleton Tribunal on Wednesday that at the end of an editorial conference in Independent News & Media (INM) in 2014, Sheahan turned to her and said that Sgt Maurice McCabe was “a paedophile.”

She said she was shocked by the comment even though it was common during that period to hear journalists in the INM building referring to rumours about the Garda whistleblower.

She said she was shocked by Sheahan’s comment because of the word used.

The tribunal has heard that in 2006, Sgt McCabe was investigated because of an historic allegation of child sex abuse. The charge was dismissed by the Director of Public Prosecutions.

Harris told Kathleen Leader, for the tribunal, that the then group news editor, Ian Mallon, had once said to her there was “more to McCabe than meets the eye” and that “you know about McCabe and children.”

Rossa Fanning SC, for INM, Mallon and Sheahan, said his clients would be denying the alleged comments when they gave evidence.

Harris said she believed Sheahan thought Sgt McCabe was a paedophile and was trying to “warn me about being too innocent.” She said she did not know the source for Sheahan’s belief.

Harris told the tribunal that during her period as editor, the INM group structure was changed and Stephen Rae was appointed editor-in-chief over all the group titles. Sheahan was the group political editor.

She said the Sunday Independent and the Irish Independent took different views in relation to Sgt McCabe.

Mr Fanning said the height of her evidence was that she heard journalists discussing rumours but didn’t have any information about their sources.

Harris said there was “absolutely no foundation” to the suggestion that she resented the group editorial structure put in place at INM during her time as editor or that she was “happy” to make a statement to the tribunal that would have “negative consequences” for editorial executives.

“All I know is that he said it,” she said, referring to Sheahan. “It gives me no joy to say so.”

She did not agree that her statement might have negative consequences for Sheahan, adding he could come to the tribunal and reveal his source. She did not think journalists should be “part of a cover up.”

Mr Fanning said Harris was giving evidence that was “tainted by improper motives. You are a bitter person. You bear a grudge towards Mr Sheahan and your former employer.”

He said her “grudge” towards INM was evident from opinion pieces she had written about her time with the group. Harris said she was retired for three and a half years and had rarely written about her former role. She was asked very regularly to talk about “life in INM and life under Denis O’Brien” but turned them all down.

“I am the least bitter person. I bear no grudge.”

Mr Fanning said that in a recent piece in the Sunday Business Post she had referred to men attending meetings during her time at INM with “big swinging titles”.

Harris agreed this was a reference to executives in the new group structure but said it was not evidence of an “animus” towards them. She said she always tried to use colourful language.

“They reported up the line what the editor of the Sunday Independent was planning.”

Responding to her counsel, Darren Lehane, she said it was not the case that she was conducting a “negative campaign” or conducting a “personal vendetta” against the INM executives.

Seven more people die in Northern Ireland from coronavirus 18:14
Boy (5) who died in farm accident in Co Roscommon is named 18:05
Surge in unemployment payments to more than 700,000 18:03
Coronavirus: 16 more people have died in Republic bringing total deaths to 174 17:50
‘It’s a leap into the unknown, a real baptism of fire’ - medical students graduate early 17:30