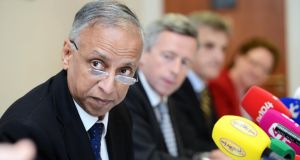 The legal situation should be addressed “urgently” to ensure that not only the life but the health of the mother can be protected in pregnancy, the chairman of the review team said.

Prof Sabaratnam Arulkumaran was asked whether, to ensure another woman did not die in circumstances similar to those in which Savita Halappanavar had died, the law should permit termination of pregnancy where there was a threat to the health and not just to the life of the mother.

“There are certain conditions a pregnant mother might have which can suddenly escalate – for example in this particular situation from an infection that is very localised but which spreads to the whole body and is sepsis.

“With severe sepsis the mortality rate is about 40 per cent, and if she goes into septic shock the mortality rate can be as much as 60 per cent. This can be in a very short period of time which means that [if] intervening is at a later stage it is difficult to bring the patient back to normality and to control.

Medical community
“So what we are saying is the medical community have to discuss with the legal profession if you really want to say the chances of making sure someone survives; this needs discussion.

“We don’t want another death happening because there is some ambiguity about how they interpret the law.”

He also said there were situations where a mother’s health only was threatened but which could escalate rapidly into a situation where her health would be permanently damaged.

“If you have infection, by the time it comes to sepsis and severe sepsis the fallopian tubes might be injured, she can become sub-fertile, she might have [later] an ectopic pregnancy. Life-long she might have pelvic inflammatory disease. I mean, how much are you prepared to take before considering termination of pregnancy?

“At what point is this going to give permanent injury to the woman, or what point might it escalate to death.”

He said too much responsibility was on individual doctors to interpret when it was legal to intervene, leading some to wait until the foetal heart stopped to be sure they were acting within the law.

“Even until the last minute they are waiting for the foetal heart to disappear before the termination would be considered. Some might have done it much earlier ... so it seems to be a little bit individual, even within Ireland. So we must have some definitive meanings as to when you think this should be done.”

His patient
If Savita had been his patient in the UK she would have been offered a termination on Sunday, October 21st, the day she went into hospital. “If it was my case I would have terminated the pregnancy,” he said.