Tractors, tarts and GAA paraphernalia are just some of the varied offerings 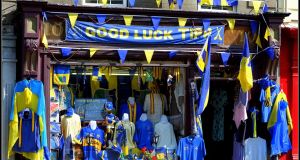 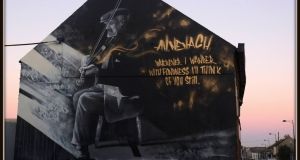 Farming is in the town’s blood. Abbey Machinery, one of the largest suppliers of farm machinery in the country has had a presence outside the town for decades and opened a new plant last month. 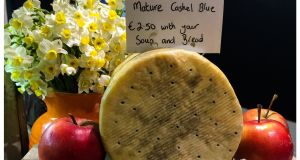 Peter Ward runs Country Choice, a food emporium whose reputation lures food tourists from all over the country

Nenagh is a big agricultural town. Historically a market town, it came into its own when Co Tipperary was divided into two ridings. Grange, a few miles outside the town was where Daniel O’Connell held one of his monster meetings to repeal the Act of Union.

Farming is in the town’s blood. Abbey Machinery, one of the largest suppliers of farm machinery in the country has had a presence outside the town for decades and opened a new plant last month.

It is not the only big farm-related employer in the town. Nenagh is home to several creameries most notably Arrabawn while Liffey Mills sells meal and feed to farmers. And if you want to buy cabbage plants or seed potatoes then head to McLoughlin’s Hardware.

A big part of the weekend trade is visiting bridal parties who sashay their way down Keynon Street to Kathy de Stafford’s only shop outside Dublin where gowns of silk and tulle are tailored to fit each bride for her big day.

The retail community in Nenagh really supports its own and prides itself in sending business from one shop to another to create a heightened and vey personalised shopping experience for the customer.

The Irish Times Best Shops in Ireland competition returns next Saturday, June 25th. Shopping Spraoi will resume in the autumn.

Less than €20: The Starrs have run a business from this premises since 1907 and Joe jnr and his wife Angela Kennedy-Starr now run the place and live over the shop. Formerly a tailors that employed up to 14 tailors it now sells women’s clothing and old-fashioned household items. While seasonal, Tipperary county paraphernalia accounts for a whopping 25 per cent of the business. There are flags, bunting, wristbands, ponchos and jerseys that say, Born to play for Tipperary, from €10. Joseph Starr & Sons, 10 Mitchell Street; Tel: 067-33623

Less than €50: Peter Ward runs Country Choice, a food emporium whose reputation lures food tourists from all over the country. You can spend far less than €50 here. The new unpasturised butter with a saffron-yellow colour costs €5.50 per pound and the pesto is €6.90 for 100ml. There are Tipperary cheeses galore, wines from small producers and a plethora of other must-buys. Country Choice, 25 Kenyon Street; Tel: 067-32596, countrychoice.ie

Less than €100: John Quinn inherited his talent for fixing furniture from his grandfather who repaired cartwheels before there were many cars on the road. Quinn studied cabinet-making at Letterfrack, set up his business and, during the recession, repairs and upholstery became his bread and butter. A set of six dining chairs with pop-put seats costs from €15 per chair to re-upholster, while a wingback chair will cost from €300 to re-upholster. Prices exclude fabric. He usually sends customers up the street to TwentySix, Treetop Interiors or Jody Brown Design to choose from their swatch books. Riverlane Antique Sales and Restoration, Kanyon Street; Tel: 067-37256

Less than €500: Margaret Corscadden’s shop TwentySix is where her parents once ran a hardware store. She sells Sloan paint, furniture and accessories and she has a supplier who trawls antique markets in France and Switzerland for furniture and lighting and this stock changes all the time. It currently includes a French Louis 14th-style chandelier, €750. This mini volière pendant (left) by Mathieu Challières is a whimsical take on the traditional birdcage. It comes in two sizes, €245 or €495. TwentySix, 26 Kenyon Street; Tel: 067-32805, twentysix.ie

More than €500: Founded by Mary and Joe Cavanagh in 1947 Abbey Farm Machinery is one of the biggest sellers of farm machinery. Abbey Retail, opened in 2002, sells everything from spare parts to slurry spreaders. A new Massey Ferguson tractor costs from €50,000 to €140,000, says manager Sean Kinane. The modern farmer is clean cut, says Clodagh Cavanagh, the founding couple’s granddaughter. “Many younger farmers are also doing a day job and no longer use baling twine to keep up their trousers.” Abbey Retail, Well Road; Tel: 067 33742, abbeyretail.ie

Down Time: In Nenagh you’re spoilt for choice for places to go for lunch or a coffee. Many Country Choice graduates work at The Pantry, while Cinnamon Alley is the go-to spot for delicious confections such as dark chocolate meringue nests. At Orla Gleeson’s Saturday cake stall expect to come to blows with someone over the last slice of lemon pound cake.